With the 23rd pick in SB Nation's 2011 NHL Mock Draft, our Pittsburgh Penguins delegation at Pensburgh select center Rocco Grimaldi, from the US National Team Development Program in the United States Hockey League. 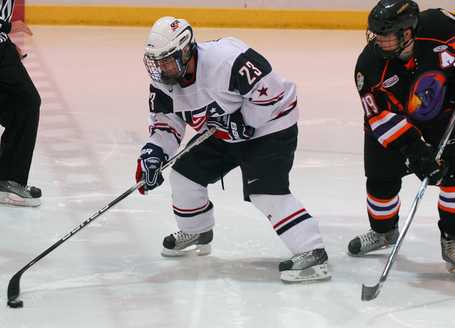 Grimaldi is a tiny little guy, as you can see in the photo, standing at just 5'6" and 163 pounds. But as you expect, what he lacks in size he makes up for in speed and work ethic. He'll step up despite his small stature, can play physical and can score and dazzle with the best of them.

Western College Hockey Blog says that Grimaldi is tops among USNTDP prospects in this draft, and that each time writer Chris Dilks saw him during his teenage years, he continued to impress. His size has yet to hinder him as he's moved up the ranks -- from Select 15's to U16's and U17's, etc.

Here's how Pensburgh justifies the pick:

Any player who's still on the board at #23 has some question mark or limitation- for many it is work ethic, physical maturity (as in putting on weight or strength) or drive.  Grimaldi has that in spades.  In the NHL today, some of the best offensive players include Martin St. Louis, Brian Gionta, Daniel Briere and Tyler Ennis- all players who look like they couldn't get on roller-coasters compared to their contemporaries.

But all of those little players, to a degree, have an edge, are excellent skaters and think the game well, all combined with having great hands and skill.   Grimaldi seems to have that pedigree.