With the 23rd pick in SB Nation's 2011 NHL Mock Draft, our Detroit Red Wings delegation at Winging It In Motownselects, from Farjestad of the Swedish Elite League, defenseman Jonas Brodin. 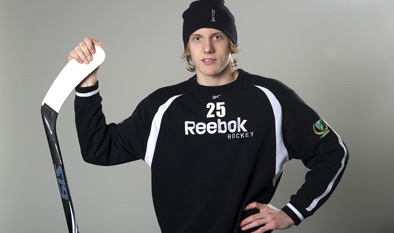 Brodin's a two-way defenseman that's praised all around by scouts for his hockey smarts. He's a brilliant student of the game and it shows in his play. He's another player that's a little bit undersized at 6'1", 172 pounds, and when he comes over to the much more physical North American game, he'll have to get on a fast track when it comes to bulking up and using his body more.

But that's teachable. It's hard to teach calmness with the puck and hockey intelligence, and Brodin has that.

Here's how Winging It In Motown justifies the pick:

Overall, it seems like Brodin's strongest asset at this moment is his skating ability and his knowledge of the game. Some of the profiles of him indicate that he's lacking a physical presence, but at 17 years old he has plenty of time to mature physically and develop that aspect of his game. Will he be a good fit in the Detroit system? Who knows. He has to get drafted first.