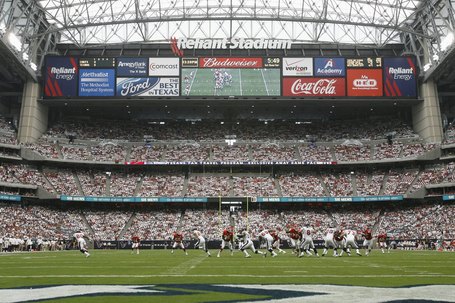 The Dallas Stars will apparently play the Phoenix Coyotes in a preseason game at Reliant Stadium in Houston this fall, and that's going to stir up a whole bunch of baseless speculation. Get ready.

1. The Winter Classic is coming to Texas.

2. The NHL is coming to Houston.

Houston is definitely one of those markets always in the NHL expansion/relocation debate, especially since Winnipeg has a team now and Quebec City doesn't have an arena. It's the largest metropolitan area in the United States without an NHL team -- yes, sorry Atlanta -- and they have a rich hockey history thanks to the WHA's Houston Aeros.

A team by the same name played in the IHL in the 90s, and just this month they lost in the AHL's Calder Cup Finals. The Stars are playing a game in Houston to show off the city's NHL credentials. Of course. No other explanation.

3. The NFL season will be canceled, or at least delayed a month.

People will say this, just you wait. Never mind that the Texans don't have a scheduled game at Reliant Stadium between September 9 and October 2, and this game between the Stars and Coyotes is scheduled for Friday, September 23. Someone will make this argument. It's only a matter of time.

The only serious news in this story is that the Stars are playing the Coyotes. Just, for the record.