The NHL made the whole Atlanta Thrashers-to-Winnipeg thing officially official today, approving the sale and relocation of that team. With that, the Thrashers identity is officially no more, and the Winnipeg's identity can officially come to life.

Of course, the problem with that is simple: we still can't call the Winnipeg NHL team anything but the "Winnipeg NHL team," and that makes everything really awkward. They have no identity. As you might imagine, the new website reflects this pretty well.

If you're still not getting the link concept on the Internet, don't worry. This is what winnipeg.nhl.com looks like. 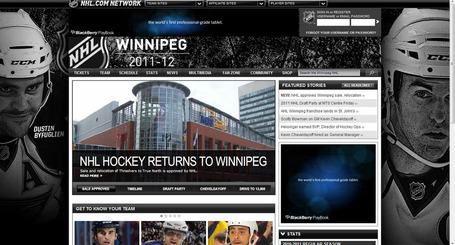 It could be worse, of course, if they left the pictures of Dustin Byfuglien and Andrew Ladd off the page. But the whole thing just screams awkward -- from the "WINNIPEG | 2011-12" in the header to the "The Official Web Site -- Winnipeg" in the title bar. Yes, it's the official website of the City of Winnipeg.

Then again, at least it's not looking like the Thrashers website. When you head to thrashers.nhl.com, you don't get much of anything. 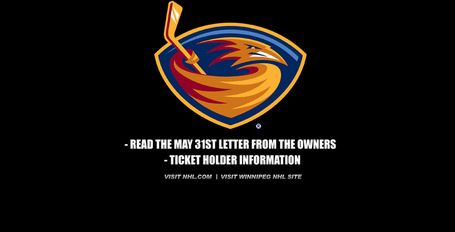 And the words "Atlanta Thrashers Update" sit in the title bar. Uhh, right. As goes the death of a pro sports franchise in the 21st century.

For Winnipeg NHL news with actual colors and content and stuff, visit our new blog covering the team over at Arctic Ice Hockey. For a look back at the Thrashers, they're still saying goodbye at Bird Watchers Anonymous.