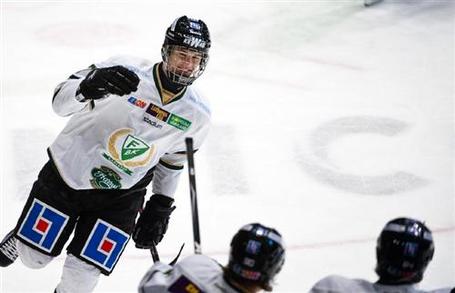 Klefbom is a bit of a raw talent, and he's ranked 6th in the draft among European skaters by Central Scouting. He's a big guy, and rare in this draft in the fact that he doesn't need to add much bulk to his 6'3" frame, and also in the fact that he plays with a bit of an edge in his game. The European players with that attribute tend to already call North America home, unlike Klefbom, who's still in Sweden.

He's a great skater for his size and he has a pretty nice shot as well, although he leaves a bit to be desired as a power play quarterback.

In several different mock-drafts that you can come across on the web, Klefbom doesn't drop this far in the draft order. You can find him selected top-20 in some instances... So seeing him on the board this late gave weight to his selection.

Yes, it's another Swedish defenseman. No, I'm not the one here at Raw Charge who has the Swedish Fish craze, that's Cassie. The reason Klefbom is the selection is his size (6'4") and the fact he's another offensive defensiveman who can be groomed to play in the 1-3-1.