With the 22nd pick in SB Nation's 2011 NHL Mock Draft, our San Jose Sharks bloggers at Fear The Fin select Boone Jenner, a center from the Oshawa Generals of the Ontario Hockey League. 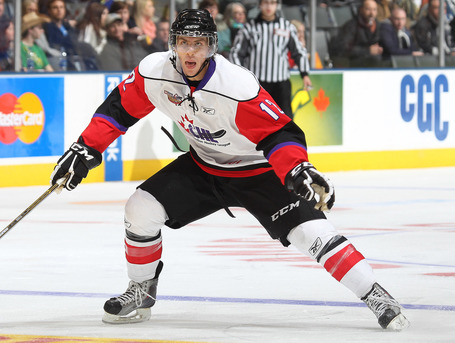 Jenner is one of those guys that just puts it all together. He's got a nice build and has shown sizable improvement year-to-year so far in his junior career, a sign that he's going to keep getting better as he reaches the professional ranks. He's a strong two-way player and he's got strong vision, which you've likely read about half the players in this draft.

If there's any knock against Jenner it's his skating, but again, he's shown the ability to improve his game and he has every other piece of the puzzle so far, so he should be a solid player in the NHL when he gets there.

Here's how Fear The Fin justified the pick:

San Jose has never had an issue with drafting players who are lacking in the skating department, and if Jenner is available in the latter stages of the first round, I don't think there's any doubt he will receive consideration from the organization. Adjectives such as "big body", "tough on the puck", "two-way presence", and "competitiveness" are commonly used to describe the 18 year old center-- furthermore, he has been compared to Philadelphia Flyers center Mike Richards, and told Buzzing The Net, "I like to play like [Philadelphia Flyers centre Mike Richards]. He's a great role model. If I can be compared to him, that would be great."