Alex Ovechkin Has A Direct Line To Vladimir Putin?

Share All sharing options for: Alex Ovechkin Has A Direct Line To Vladimir Putin?

This doesn't seem like someone that should be granted influence on world leaders. 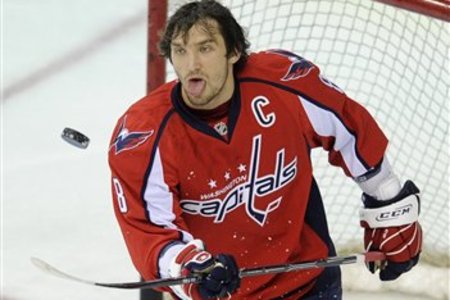 Nevertheless, while he's posed for photos with the First Lady and Barack Obama has called him "outstanding", Alex Ovechkin's political connections go a step further. A continent further, actually. That would be Russia's Prime Minister and one-time Russian president, Vladimir Putin.

A new interview features Ovi talking about his friend at the Kremlin.

He has a direct line to Vladimir Putin ...

"But it’s not his cell phone number, but rather his home phone," [Ovechkin] explained. "I call him often. But Putin is never at home. So far I haven’t managed to talk to him yet!"

This would be like Derrick Rose having a direct line to the White House, only it's even better, because Putin might be the most terrifying, mysterious dude on the face of the earth.

Also because Ovechkin's a whole lot crazier than someone like Derrick Rose.

It just proves an old rule. If there's a story about Alex Ovechkin, always click, because you just never know what you might find. Maybe he's smoking hookah and drinking beer, maybe he's eating cupcakes, maybe he's hanging out with Michelle Obama, or maybe he's chillin with Lil Wayne. Or maybe he's drunk dialing the most powerful man in Russia (that's how I like to imagine the calls, anyway).

Remember, though: there's always some truth in jest.