Prior to Game 3 of the Stanley Cup Finals between the Boston Bruins and Vancouver Canucks, Claude Julien called out some members of the Canucks, namely Maxim Lapierre, for taunting the Bruins about the Alex Burrows-Patrice Bergeron biting incident.

Among other things, Julien said this:

"I can't really talk about their team. I'm going to talk about mine because I don't handle those players. I don't deal with those players on a one-on-one basis. It really isn't up to me to I guess comment on it. If it's acceptable for them, then so be it. Certainly wouldn't be acceptable on our end of it."

It wouldn't be acceptable on our end. Hmm. So what happens when Milan Lucic does it? 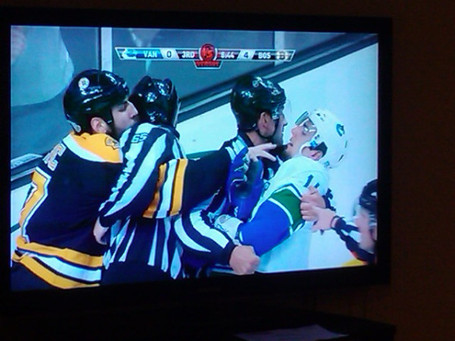 Not to say it's any less funny when Lucic does it, we're not picking sides. But when Julien said he won't accept this stuff, it makes it much more interesting.

This series is getting fun. Or something. Guess it depends who you are.