With the first pick in SB Nation's 2011 NHL Mock Draft, our Edmonton Oilers delegation at The Copper & Blue have selected Adam Larsson, a defenseman from Skelleftea HC in the Swedish Elite League. 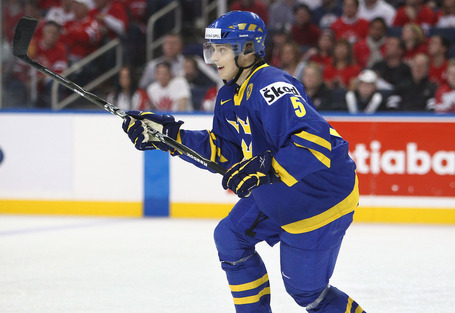 Last year, it was a different story with Taylor Hall. This year, they've opted to go with Larsson over the slightly-favored Ryan Nugent-Hopkins. Why? We'll let them explain.

Larsson will be a top pairing defenseman, capable of playing both ends of the ice, in all situations, for the next 10 to 12 years. He will be a cornerstone for the Oilers franchise for more than a decade. As the best player available in the draft that is simply too much to pass up. The 69 of you who asked for Larsson back in September, you get your wish.

Read more on their reasoning and discuss the decision with Oilers fans over at The Copper & Blue. Learn more about Adam Larsson via draft profiles here at SBNation.com and at our Blue Jackets blog, The Cannon.

Next up on the clock, we have the our Colorado Avalanche delegation from SB Nation's Mile High Hockey.