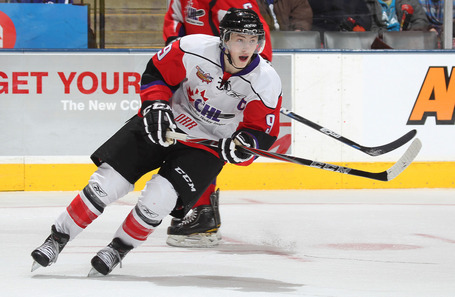 Nugent-Hopkins is the top ranked skater in the 2011 NHL Draft class, and it seems as though our Avalanche bloggers are quite happy that he fell to them. With the first overall pick, our Edmonton Oilers at The Copper & Blue selected defenseman Adam Larsson, claiming that he's the best pllayer in the draft.

But just read the folks at MHH, and they seem to like their fate.

But, the folks at Copper and Blue threw us a curve. They've surprised everyone by taking defenseman Adam Larsson at #1. While center is the position the Avalanche need the least, there is no way we could pass up a player many consider to be the most talented player in the draft...especially one from Burnaby. Also, we like hyphens. So, welcome to the club, Ryan Nugent-Hopkins. And we mean literally, because today we're shipping out Paul Stastny, Joey Hishon and Marek Svatos for Tyler Bozak to make room for you.

Read more about the pick at Mile High Hockey. You can learn more about Ryan Nugent-Hopkins all around SB Nation, via this profile here at SBNation.com or another at our Blue Jackets blog, The Cannon.

That's it for Thursday, the first day of our mock draft. (Sorry about the late posting, too. Technical issue stopped it from going up as scheduled earlier.) We'll be back with two picks on Friday, as the Florida Panthers and New Jersey Devils are on the clock.