Could this be the new Winnipeg Jets logo? (UPDATE: Yes.)

From the Jets site JetsOwner.com, via SportsLogos.net, comes what looks like a leak. You know, grainy cell phone-style image and all: 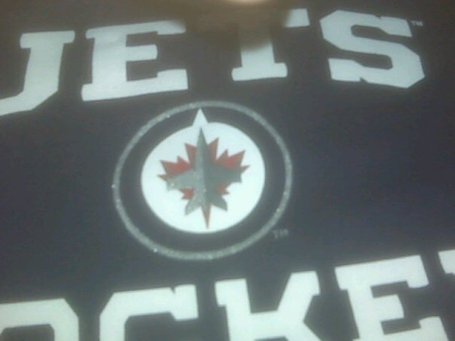 As Chris Creamer at SportsLogos.net points out, this does look a style of shirt that's been sold on Shop.NHL.com, and if it's a fake, it's a hell of a lot of work that somebody put in to make it happen.

This also looks strikingly similar to some rumors that have been floating around the web, including (oddly enough) at our Florida Panthers blog, Litter Box Cats. A reader there submitted a FanPost on the subject, claiming to have knowledge of the logo design process. The mockups of this rumored logo that he submitted with that post are creepily similar as well.

Take it for what it's worth -- a midsummer rumor about a logo. But it's intriguing, to say the least.

If this is the real logo for the new Winnipeg Jets, do you approve?