NHL Relocation To Hawaii: Examining The Possibility Of The Honolulu Islanders

A recent study said that Honolulu, Hawaii would be an option for NHL relocation. Is the idea crazy enough to work?

Share All sharing options for: NHL Relocation To Hawaii: Examining The Possibility Of The Honolulu Islanders

The Business Journals recently published a study on possible destination cities for NHL teams looking to relocate. The authors of the study used a methodology solely based on available personal income, and the results were good for a chuckle among many NHL fans.

Riverside, Calif. was ranked first while Atlanta, home to the freshly-departed Thrashers, was ranked 11th. But the biggest surprise was Honolulu, Hawaii ranked 15th, prompting Yahoo's Greg Wyshynski to laugh about the fact that all of these markets were ranked higher than 31st-ranked Quebec City.

While income is a key to finding a new market, and one of the primary reasons I believe Winnipeg will be the worst market in the NHL should the Canadian dollar lose steam, it's not the only factor. The other major fiscal consideration for new markets is corporate strength. I've discussed corporate strength when looking at the top markets available to the NHL and while Houston, Las Vegas and Hartford (numbers two, four and eight respectively) do extremely well by that measure, Honolulu does not.

Setting aside weather, distance and lack of a hockey culture, the fiscal weakness is the major factor in undermining the market as a whole. The state of Hawaii is home to exactly zero Fortune 500 companies, meaning any team in Honolulu would lack major corporate sponsors, placing enormous financial stress on any perspective owner, as well as a roster of smaller, local companies.

But what if? What if, for example, Ebay founder Pierre Omidyar, a resident of Honolulu, got it in his head that he was going to bring a hockey team to Hawaii? Could he acquire a team? What impact would that have on the city? What about the NHL?

Given the lack of corporate support in the area, it would take someone with billions to bring a team to Hawaii. Omidyar would be the ideal owner. He's connected to America's 50th state through a series of charities and is committed to improving the quality of life for all Hawaiians, and what better way to do that than to bring major league professional sports to the islands?

Conveniently, the New York Islanders need a new home. Omidyar has the assets to purchase the franchise from Charles Wang and move the team 4,980 miles west to Honolulu. It's a match made in heaven; so perfect, in fact, that the franchise wouldn't have to be renamed. 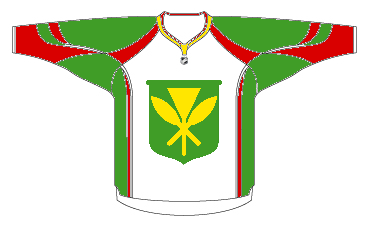 The personal flag of Kamehameha, the conqueror of the Hawaiian Islands, comes to life on the Islanders' road sweaters.

Honolulu does not have an arena suitable for an NHL team, so Omidyar would need to do what Wang could not --convince the local and state government to open up their wallets and build him an ice palace. The ideal location for a new arena would likely be Honolulu's Kaka'ako district, a mixed use neighborhood, sandwiched downtown Honolulu and Waikiki. The arena would be a tropical paradise, replete with palm trees and water, much like Jobing.com Arena, pictured above. The ice in the arena shouldn't be a concern -- Honolulu's temperatures are very similar to those in south Florida, but the area is significantly less humid than Miami.

As I mentioned above, corporate sponsorships are going to be hard to come by on the Islands, especially when compared with mainland teams in large metropolitan areas. Without any enormous corporations, Omidyar's management team would have to work hard towards bringing companies like Bank of Hawaii, First Hawaiian Bank, Hawaii Electric, Hawaiian Airlines and Alexander & Baldwin into the fold in a significant financial manner. It could be a tough sell.

On the other hand, the Islanders would have one significant advantage compared to their mainland opponents -- hockey tourism. The Florida Panthers tried something along these lines, but the Islanders could do this on a much larger scale, especially to Canadian fans and those American fans in Chicago, Washington, Boston, New York and Philadelphia. Honolulu's temperatures hover in the low 80s throughout the winter and the humidity remains in check. The ability to offer extremely attractive ticket prices on high-end seats or loge box-type seating combined with a winter vacation could attract a significant number of snow bird visitors. 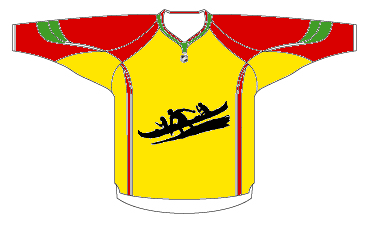 Locally, there are a few issues to overcome. The city of Honolulu, through it's development authority, and the state of Hawaii, through direct contributions and favorable tax treatments, have already contributed to a significant number of projects meant to revitalize Honolulu, especially in Kaka'ako. Is there enough money left for a project the size of a new arena? Is there enough political will to do so? If so, a new arena would be a done deal.

One of the primary criticisms from northern neighbors towards southern markets has been a lack of hockey culture. Honolulu has none of this culture whatsoever, and organized hockey is non-existent. There aren't enough snowbirds in Canada and the U.S. to generate enough season ticket sales or ticket sales in general, so the Islanders would have a long, steep fight to build a base in the state. Hawaii has no local dedicated sports channel, so the Islanders have no easy or immediate broadcasters and would likely have to go with a local affiliate station as a broadcasting partner.

Moving the Islanders from Uniondale to Honolulu would have a profound effect on the NHL. Coupled with the Thrashers move to Winnipeg, the two moves would re-shape league alignment. Both teams would move to the Western Conference, and a divisional shuffle would follow.

The arrival of Dallas and Minnesota to the Central Division pushes the Predators to the Southeast and the Blue Jackets to the Atlantic. The only division left untouched is the Northeast.

The biggest impact on the league would be the additional travel miles for each NHL team. In 2011-12, the Los Angeles Kings will travel more than any other team at 55,600 miles, but Honolulu is 2,500 miles away from Los Angeles. As a result, if the NHL were to keep the scheduling methodology they currently use, the Islanders would travel over 100,000 miles every year.

The NHL would have to overhaul the scheduling process in order to reduce travel miles for the franchise, but the only other option is baseball-like road trips -- 12-14 games away from home at a time, followed by the same amount for a corresponding homestand. Even with the weather, the beaches and the girls, no free agent in his right mind would want to travel that much, putting the Islanders at a severe competitive disadvantage.

Though it's a fun mental exercise, it can't work. Travel would be a logistical nightmare and prevent the franchise from attracting free agents and competing. Travel costs for the rest of the league would soar and jet lag would become an unfair home ice advantage for the Islanders at home and the opponent on the road. The local business climate isn't strong enough to support a franchise, and the only way a team would remain viable is through revenue sharing and an owner willing to lose millions year in and year out.

Even though there is a wealth of available personal income, there aren't enough other factors to support a team in Honolulu. Besides, when it comes down to it, the NHL already has an ideal relocation destination.

Special thanks to Puck Drawn for the sweater template.