The report this morning in the Pittsburgh Tribune-Review, which said that some Penguins players had privately questioned whether or not Sidney Crosby was actually able to play or not, dropped like a bombshell on Friday morning.

The team had allegedly held a team meeting to discuss a temporary captaincy, with some players saying they didn't totally believe that Crosby's symptoms had returned. Never mind if that doesn't make all that much sense. It painted a picture of a disjointed team going through some very difficult struggles, perhaps covertly blaming the injury of their best player as to why they've fallen out of playoff position.

But on Friday morning at practice, they tried to send a different message. 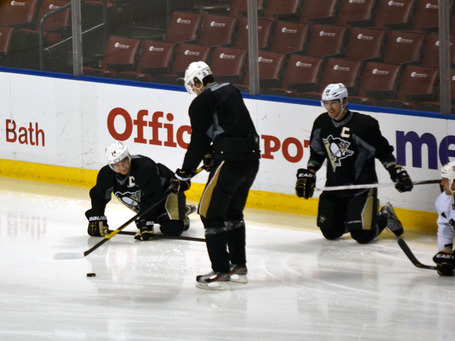 In fact, Crosby was the only one on the team who didn't have a 'C' on his chest during the skate. It was a show of solidarity with the captain, and in his own words afterward, Crosby thought it was good to see.

That was a nice gesture, and I think especially at a time like this when things are tough, and obviously some adversity with the injuries, a few losses. We need to stick together. That was a good sign right there that we're sticking together.

Whenever you have adversity there are always times where it's kind of in question -- your team's in question, your character's in question. I don't think there's ever been a point with our group, so it's good to see everyone sticking together. I think we'll see the results out there on the ice.

For more on the team, check in with Penguins blog Pensburgh. For more on the injury to Sidney Crosby and his ongoing recovery, keep tabs with our StoryStream.