We're scoreless at Citizens Bank Park in Philadelphia with about 10 minutes remaining in the first period of the 2012 NHL Winter Classic, and we can blame that solely on the butt-end of Henrik Lundqvist's stick.

A few minutes into the period, Claude Giroux beat New York Rangers defenseman Dan Girardi and broke in on goal. Lundqvist came out to challenge Giroux, and the Flyers star almost had him beat, but Lundqvist had a bit of luck on his side.

The game has been relatively slow in the early going as the teams work out the kinks and quirks of the outdoor ice rink. The teams have gotten involved physically a bit after whistles around the New York yet, but no penalties have been awarded just yet. That's not stopping the fans from enjoying the atmosphere at the ballpark, however. 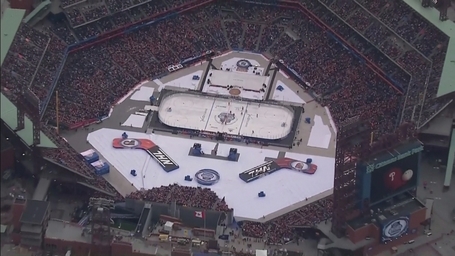