HBO 24/7 Flyers-Rangers concluded in beautiful fashion this week, covering the Winter Classic in a way that we could never expect. After four weeks following two teams, we realize once again that hockey is much more than just a game. It's a way of life.

Share All sharing options for: HBO 24/7 Flyers-Rangers, Episode 4 Recap: It's Not 'Just A Game,' After All

"Never get caught telling a hockey player it's just a game. Never get caught trying to explain to him all the things in the world that matter so much more. His mind might well acknowledge the truth to your point, but his soul will be powerless to accept it. Considering the immensity of what he gives to the sport, and the immeasurably of all it offers in return.

Nothing ever feels as perfect as a moment of flawlessness on the ice. No bond as strong as one that compels brothers to bleed for one another. Not many leaders are this versed in the craft of motivation. Not many pursuits evoke such visions of brilliance.

The stakes rise as their seasons continue from here. While you watch from a distance, remember what was validated up close. Hockey may in fact be just a game, but it's also who they are."

That was the close of this year's HBO 24/7 Flyers-Rangers: Road To The NHL Winter Classic, and my God, it really couldn't have been much more perfect. It's inspiring, chill-inducing and even at times, tear-inducing. It's the same way they opened the series, with the close-up black-and-white shots of the players covered in scars. They ended with those same faces, now smiling as they continue their pursuits in the midst of an NHL season.

That's part of the brilliance of 24/7. They don't pretend as if they are building to an ultimate climax, even if the show is indeed chronicling the "Road To The Winter Classic." There's nothing fake about it -- these teams are still in the middle of their ultimate pursuit of the Stanley Cup, and through the 24/7 series, we're just onlookers taking a short glimpse inside of their world. It continues just the same once we leave, and it gets even more intense.

With that, Episode 4 and the season concluded, but not before taking a look inside the 2012 Winter Classic and the few games prior to Monday's outdoor showcase. Let's take a look at some of the more memorable moments of the season finale of 24/7.

This week's Bryzgalov watch is not nearly as fun as it has been in prior weeks. Gone are the clips from that bizarre sit down interview, where he's wearing the leather jacket and talking about the universe. Enter sad, uncomfortable media scrums where Bryz shows little-to-no confidence in talking about his game.

This is nothing we didn't know, but we do get the inside look at how Bryzgalov appears behind the scenes. We get Jeremy Roenick telling the Flyers goalie that Philadelphia is the perfect town for him, and that if the Flyers are to win the Cup, it'll be because of Ilya Bryzgalov.

To Max Talbot, on his return to Pittsburgh:

If you're gonna fuck up, do it in warmups.

On the Winter Classic:

The Winter Classic is great, but you're not going to enjoy it unless you win the hockey game so take care of yourself. Make sure that you lay off any alcohol tonight, get good food, make sure you go to bed at the right time. Make sure if your life is complicated with people in town, get rid of the people. Focus on what you gotta do, cause when you wake up in the morning, it's gonna be here quick. Really quick. So make sure you're ready to play the game and give everything you've got when that happens.

John Tortorella doesn't have much patience, as we've learned throughout this series so far, and it was never more evident than during his film session in Florida the morning before the Rangers game against the Panthers. Jerry Dineen the team's video coach, set up his equipment well in advance of the team arriving, but in the middle of Tortorella's spiel, the projector bulb died.

Not in poor Jerry's control, but that didn't stop Torts from highlighting his frustration.

DINEEN: The thing burnt out ... It might be a problem.

TORTS: It can't happen right now, this is important.

DINEEN: Got the uh, TV next door.

DINEEN: It's a turnover at the blueline.

TORTS: It's a major league fuckin' turnover at the blueline.

[light comes back on] 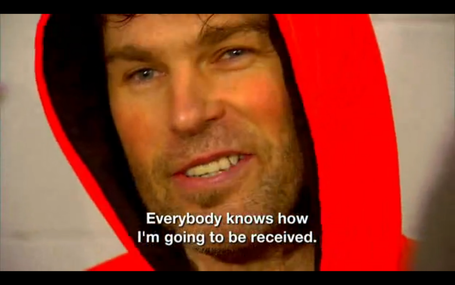 Laviolette chose to start Jagr and Talbot on a line centered by Claude Giroux. That's not a typical unit for the Flyers, but getting both of those guys out on the ice to start the game was important. They approved of the decision. 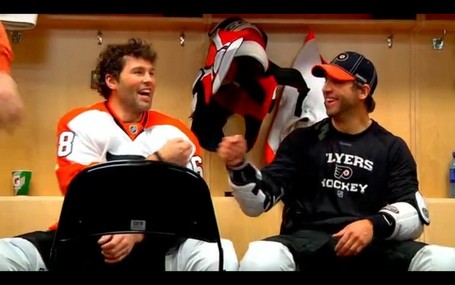 Both Jagr and Talbot wound up scoring goals in the game, but it wasn't either of those that highlighted this segment of HBO's game coverage. Instead, it was a Scott Hartnell chirp of Evgeni Malkin -- Laviolette told Hartnell to "keep it up, you're pissing everybody off out here" -- and Talbot complaining about getting speared in a, uh, delicate spot.

In Florida, Tomas Kopecky's cheap shot on Michael Del Zotto produced a pretty nasty cut on the face of Rangers defenseman. It also produced some nice fodder for HBO's cameras. Kopecky suckered Del Zotto right in the face near the final horn of the game, and he was jumped by Brandon Prust. Then, Mike Rupp joins in and absolutely destroys Kopecky in a fight.

Del Zotto skated back to the locker room and talked to the trainer about what happened.

At the bench, Prust talked about the incident with teammates.

I was thinking, like, just to jump him and beat the fuck out of him, but I didn't wanna get suspended for the Winter Classic, you know? So I had to restrain myself.

Not surprisingly, the HBO cameras gave us a glimpse into the Winter Classic that we couldn't have possibly asked for. Fantastic photography, unique sound, and essentially flawless storytelling. From Brayden Schenn's first NHL goal to Henrik Lundqvist playing like red and blue Jesus to the locker room talks at intermission, we couldn't have been closer to the biggest regular season game of the year.

There were a few moments that really stood out from HBO's game coverage, though.

- Early in the game, Claude Giroux is in on a forecheck, right in the face of Lundqvist. He pleads the most foreshadowy of pleas ever.

Fuckin' Henri, let me score one tonight. Just one.

Giroux would score one. He probably should've asked for two.

- Early in the third period, while the Flyers were still up a goal and the players were standing around waiting for the puck to drop, Giroux, Hartnell, James van Riemsdyk talking goal celebration strategy in response to Mike Rupp's mocking of the Jaromir Jagr salute in the second period.

HARTNELL: What are we doing here?

GIROUX: He says if he scores he's doing "the Anisimov." Shoot the goalie?

GIROUX: Who am I gonna fight though? I got 62, shotgun.

[players glance over at Rangers on ice]

HARTNELL: You got Hagelin. I got Girardi.

van RIEMSDYK: You see what Rupp did?

GIROUX: What'd he do?

van RIEMSDYK: He did the Jags salute. That's why we gotta respond.

GIROUX: No he didn't? Fuck off.

GIROUX: Hey, did Rupp do the fuckin' Jags salute?

BOYLE: I thought it was pretty cool.

GIROUX: How is that cool? It's the second goal of his fuckin' career

HARTNELL: That's fuckin' embarrassing is what it is.

GIROUX: The guy's a fuckin' legend.

Of course, the next scene is Rupp tying the game, and the Rangers would soon take a lead they'd never relinquish.

HBO's work on the late game officiating, the Danny Briere penalty shot in the final minute, the juxtaposition between the giddy Rangers and the heartbroken Flyers as the final seconds ticked off the clock, Tortorella refusing to shake hands, and the post-game celebration (complete with our buddy Liam) was brilliant, as we've come to expect from them.

They covered the lives of these teams for a month in a way fans never could have asked for, but for the second year in a row, we were downright privileged to experience. That's the beauty of this series. It's a little extra special when they're following your team, but it really doesn't make much of a difference the teams that are featured. It's a beautiful glimpse into the middle of an ongoing hockey season, and we have to thank HBO for taking us on the ride.