The best NHL podium photos of the 2012 NHL lockout

The NHL has a new celebrity. It's an inanimate object.

Share All sharing options for: The best NHL podium photos of the 2012 NHL lockout

NHL CBA talks are ongoing in a Manhattan hotel, and with actual negotiation taking place between the owners and players, the media and legions of fans begging for a status update find themselves sitting around with nothing to do. That's how tweets like this happen:

The NHL podium has returned to the media room. #podiumwatch

In the absence of news: #NHL has brought back podium after tearing down earlier. Press conference for #NHL only? Side by side? Intrigue!

Hmm. Setting podium back up in media room. 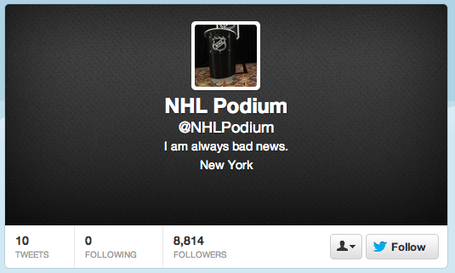 Really gonna miss the lockout when it's over, you guys.