Blue Jackets Vs. Kings: Did The NHL Try To Hide Game-Deciding Clock Malfunction?

The NHL made a mistake on Wednesday night by failing to recognize a faulty clock in Los Angeles. It cost the Columbus Blue Jackets a chance at two points. Fixing the problem wouldn't be too hard, though.

Share All sharing options for: Blue Jackets Vs. Kings: Did The NHL Try To Hide Game-Deciding Clock Malfunction?

The Columbus Blue Jackets have had a rough year, to say the least, and Wednesday night's incident in Los Angeles will no doubt add to the list.

With the game tied at 2-2 late in the third period at Staples Center, the Kings were on a power play, pressing in the Columbus end as time began to run out.

Drew Doughty carried the puck at the point and shuffled it across to Anze Kopitar. Kopitar's blast found its way to the net, bounced around between the four Blue Jackets players all boxed in the slot. It somehow found its way back out to Doughty, who ripped a shot low to goaltender Curtis Sanford's blocker side.

The puck was in the net. The crowd was cheering. The green light wasn't on, signaling the end of the period, but the red light, signaling goal, was.

But ah, wait a second. Did the puck really beat the clock?

From the FS Ohio broadcast of the game:

Yes, the puck beat the clock. But the clock decided to take a nap while at work.

As you can very clearly see in the video, the clock stopped with 1.8 seconds remaining, froze for about two seconds, and then kept counting down. Doughty scored with either 0.4 seconds left or 0.3 left, depending on your eyes, but either way, with as long as that clock froze, there's no way this goal should have counted.

It appeared as though, in real-time, linesman Jonny Murphy noticed the clock malfunction. Here's a screen grab immediately after the clock started running again, and you'll notice Murphy in the far corner waiving something off: 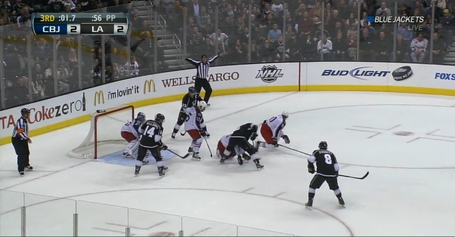 Then, immediately after the goal is scored, Murphy skated over to referee Stephen Walkom, who had signaled that Doughty scored a good goal. 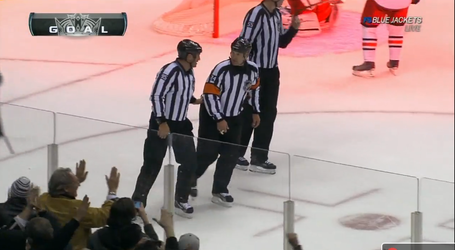 They made the trip over to the scorers table, and after a relatively short discussion with the War Room in Toronto, Walkom signaled that the goal counted. The Kings retreated to their locker room in celebration mode, while the Blue Jackets limped away to their quarters for the 32nd time this season.

Mistakes happen, video review is not fool-proof. We understand that, and it's okay, even when the mistakes are pretty obvious and pretty egregious. But perhaps the worst part in this case is that if you were to visit NHL.com this morning, you would have no idea there was even a controversy late Wednesday night on the West Coast. Not a single clue. 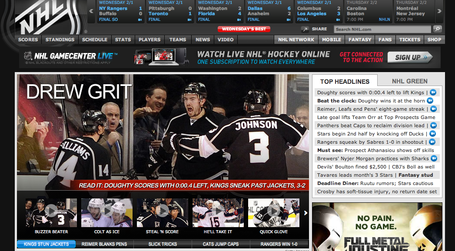 The video of the goal linked there on the league's website is from the Los Angeles broadcast, which didn't mention the clock malfunction. To be fair, we're not sure they noticed it at all. They didn't even notice it on the Columbus broadcast until just before they went off the air following the game.

To say the NHL didn't notice it, however, whether in the War Room or at NHL.com, is a stretch. So it's pretty convenient that the NHL.com video clip picks up the overhead clock view just following the freeze:

And the NHL's Situation Room blog, which explains decisions made on video review each time they occur? Not a single mention of the Kings-Blue Jackets game. 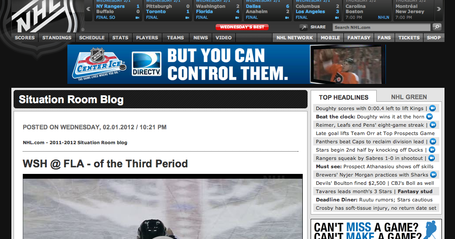 "I don't have any official report," Blue Jackets interim coach Todd Richards said. "But watching the replay and talking to the producer who does our show (on Fox Sports Ohio), the clock stopped at 1.8 and stopped for 1.5 seconds. They scored with 0.5. "I'm really disappointed for the players."

This really is an easy fix, though. Take a point away from the Kings for the time being -- they can't possibly complain, because it's so obvious that they didn't score this goal on time -- and when the Kings host the Blue Jackets on March 8, pick this game up at the start of overtime. Decide who gets the extra point, then take a typical intermission break before starting the first period of the scheduled contest.

It's not the perfect solution. Kings fans who attended Wednesday night at Staples Center might feel robbed, but really, they got to see 60 full minutes of hockey. Fans in Columbus, meanwhile, stayed up late for a West Coast game and certainly went to bed much angrier than any Kings fan who attended this game could feel.

It's clear what the NHL should do here: Admit the mistake and give the fans at Nationwide Arena some extra hockey on March 8. They won't do that, of course, but man, could you imagine how much differently we'd view them if they did?