NHL Relocation: Why The Phoenix Coyotes Won't Move To Seattle This Summer

An NHL team in Seattle makes too much sense, but Key Arena is so poorly designed for hockey that even a single season there would be unacceptable. It makes the potential relocation of the Phoenix Coyotes to the Emerald City unlikely.

Share All sharing options for: NHL Relocation: Why The Phoenix Coyotes Won't Move To Seattle This Summer

The noise surrounding a potential return of the NHL to Seattle, Wash. is just too loud to ignore. There's a group there hoping to build a new arena, and reporting by the Seattle Times has made it widely known that this group would like to lure both the NBA and the NHL to play there.

The thought of NHL hockey in Seattle is incredible. Fans there are known for being absolutely insane, like that time they caused a minor earthquake during a Seahawks game. Seattle Sounders FC fans are cut from that same cloth, and in just their first year of existence, Sounders FC found themselves backed by a huge following. If you didn't know any better, you'd think the Sounders have been playing in MLS for decades.

While it typically takes years for locals to support an expansion franchise and develop both tradition and identity in hockey (see the Lightning or Panthers or Stars or even the Philadelphia Flyers as examples), it's not far-fetched to imagine a Sounders-like love springing up from the grassroots in Seattle.

As fans of the NBA's Sonics will no doubt tell you, though, fan support isn't the only thing that matters. You need both support from the league and a building which can suitably support a team over the long-term.

The first hurdle is taken care of: Gary Bettman and the NHL are interested. It makes too much sense for them not to be interested. As Bettman told ESPN.com in Ottawa during All-Star Weekend:

"There are a lot of people who think Seattle would be a great place to have a team," Bettman said. "The Pacific Northwest, the natural rivalry with Vancouver, another team in the Pacific time zone ...

It makes sense. So much sense. You just know that Bettman, the guy whose doctrine it was to expand the NHL's American footprint, would not take kindly to relocating another team to Canada. He already was forced to admit failure when the Atlanta Thrashers relocated to Winnipeg, and if the Phoenix Coyotes were to relocate to Quebec City, it'd be another failing of the NHL's mid-90s Southern expansion.

Let's face it: We could very easily be watching the final months of the Coyotes. The NHL still owns the team, and it doesn't appear as though there's a suitable owner ready to scoop them up and keep them in Glendale. The city could float the league more money to keep them in town, but there's mounting local pressure against that, and Bettman has said any number of times that the NHL isn't in the business of operating a team.

They want to find an owner who will keep the Coyotes in Arizona. They want to find that owner before the beginning of next hockey season, but if it doesn't happen, the next option is to sell the team to somebody who will relocate them. Collect the relocation fee, move on to a place where hockey will be successful.

It's impossible to handicap which potential market has the upper hand, but Seattle certainly has a lot going for it. Bettman mentioned much of the allure, but the simple fact that it's an American city versus a Canadian city means a ton.

In a Phoenix-to-Seattle move, you'd be losing the Phoenix TV market, ranked No. 13 in the nation, but you'd be gaining the Seattle-Tacoma market, ranked No. 12 in the nation. Remember the East vs. West imbalance that partially derailed realignment earlier this year? Keeping the Coyotes in the Pacific time zone helps keep some balance, at least when it comes to keeping a team away from the already heavy Eastern time zone.

Just like in Quebec City, however, Seattle faces that one huge obstacle. Bettman again:

While not an ideal situation, an NBA team could play in Seattle next season. The Sonics left town in 2008 because taxpayers didn't want to pay for renovations to the Key Arena that would have brought it up to par, and the league has said that, as is, it's unsuitable as a long-term home for a club.

But a few seasons, with the promise of a brand new building thereafter? Yes. That will work. That's where you get the talk that the NBA's Sacramento Kings could be on the move to Seattle, maybe even as early as October.

Would the NHL be open to such an agreement? Play at Key Arena for a few years, then move to a state-of-the-art Seattle arena south of Safeco Field?

Doesn't seem that way. While Key might be suitable for the NBA on a short-term basis, it's just an awful place to watch hockey. Absolutely horrendous. The rink doesn't fit on the arena floor, and it's so bad that it didn't even work for the WHL's Seattle Thunderbirds. They wound up building their own small facility on the outskirts of town, and when you see these pictures of the ice down at Key Arena for T'Birds games, you quickly realize why: 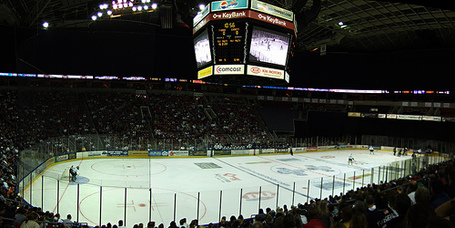 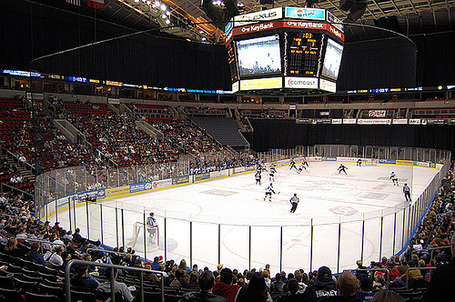 It's pretty bad when the center-hanging scoreboard is positioned over the blue line, not center ice. Half the building is completely unsuitable for viewing hockey. Even on just a temporary basis, playing NHL hockey in a building where half the lower bowl is sectioned off is just unacceptable. Imagine watching a game played here on TV: The camera pans over to the right, catching a play in the corner, and you can't see a single fan in the stands. Embarrassing, really.

You're probably thinking, "But wait, the NHL did this before!"

They did do something similar in Phoenix when the Coyotes originally relocated from Winnipeg. They played at America West Arena (now U.S. Airways Center, home of the Phoenix Suns), a building constructed much like Key Arena -- with basketball, not hockey, in mind. The ice barely fit on the arena floor, and there were actually some seats that hung over the end boards like an awfully designed balcony. 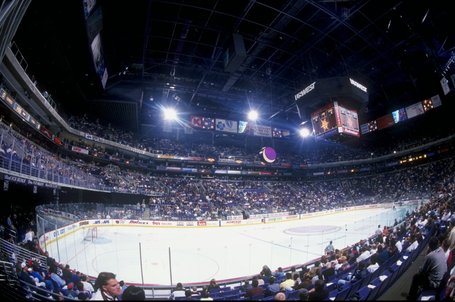 It was awful, but it worked for the seven years the Coyotes needed it to work. All you need to do is look at the pictures to understand why a similar solution isn't realistic at Key Arena in Seattle, even if it would only be for two or three seasons. A few thousand obstructed view seats in the upper deck is one thing. Throwing a tarp over half the lower bowl is another thing entirely, and the NHL just cannot allow it to happen.

It's unfortunate, because if the Coyotes have to move, Seattle is really the best location for them to land. Either way, if the new arena does become reality in Seattle, an NHL franchise there makes too much sense to not happen down the line.

But as soon as the 2012-13 season? Not unless a brand new hockey arena can be built in nine months.