From around 1990 until the NHL lockout in 2004-05, the average age of the league's scoring leaders rose considerably. Since the lockout, that number has fallen sharply. Why?

Share All sharing options for: Player Aging In The NHL: Is 32-Years-Old The New 25?

On Wednesday, there was an interesting discussion on Twitter about how productivity changes with age. Chemmy of Pension Plan Puppets commented on the notion of a contract extension for Joffrey Lupul, and Justin Bourne of Backhand Shelf suggested that aging standards are changing:

@felixpotvin I think with today's fitness tools, a 32 year old today is getting younger. My Dad retired at 34, same w/ Bri's. Rare now.

A member of the PPP community who goes by The '67 Sound on SB Nation and @67sound on Twitter chimed in with some data strongly supporting Bourne's point: In the last 15 years or so, about 30 percent of the top scorers have been at least 32 years old, whereas over the previous 15 years the comparable figure was 11.5 percent.

This seems like a pretty striking difference, but arbitrary cutoffs like the line between recent and older history and the definition of top scorer can produce some misleading results. Let's take a more continuous look at the data and see whether productivity really is extending farther into the 30's than it used to.

First, let's see how the average age of a top-scoring forward has changed over the years: 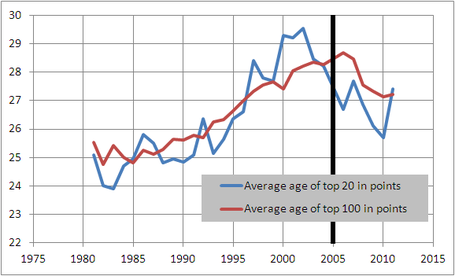 This seems pretty compelling, but I'd like to look at the data a second way to confirm what we're seeing here. This chart shows the average age of those players, but the average can move in a lot of different ways -- maybe the group of top scorers uniformly got older, or maybe it went up because fewer teenagers make a big impact now, or maybe it went up because (as Bourne hypothesized) the veterans continue to make a top impact farther into their careers.

To really confirm the hypothesis that players are maintaining high performance longer, let's look at how many of the top 100 forwards are above a certain age cutoff: 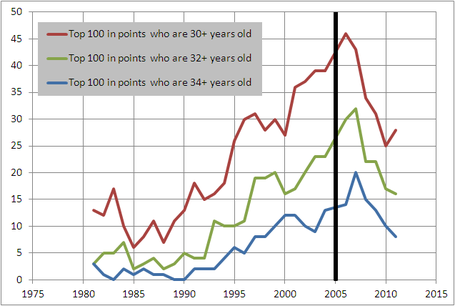 Again, regardless of whether we set the threshold at 30, 32, or 34 years old we see the same clear phenomenon: Starting in about 1990, the number of older forwards who were in the top 100 in scoring steadily rose for about 15 years, then dropped sharply soon after the lockout.

It seems clear that Bourne's hypothesis is true, that players are producing at a high level farther into their careers than they used to, and it seems reasonable to attribute this to improved fitness regimens.

What is less certain is why that trend suddenly and sharply reversed over the last five years. The data only tells us that it has, not the reason for the change. Here are some possible explanations:

Players are definitely maintaining top productivity longer than they did 20-30 years ago, but not nearly to the extent that they did five years ago. Let us know in the comments why you think things might have changed recently.