Helmets, Game Speed And The Shifts That Dramatically Changed The NHL

Helmet usage amongst NHL players increased rapidly in the 1970s and '80s, and it was primarily the result of an increase in the speed of the NHL game. These two major shifts helped shaped hockey as we enjoy it today.

Share All sharing options for: Helmets, Game Speed And The Shifts That Dramatically Changed The NHL

Shifts That Changed The Game, as a story idea, began with a suggestion by Behind The Net's Gabriel Desjardins that I use the awesome NHL Vault -- available through NHL GameCenter Live -- to view games from 1965 through 1985 and observe the evolution of the use of helmets by players (frequency, consistency, lustre).

Not one to color between the lines, I took quite a few notes on various characteristics and evolutions of the game during the time period, and I noted a few that seemed to have a drastic impact on the manner of play. This turned into a series under the same title over at Arctic Ice Hockey, which has included a look at the innovation of the curved stick blade and the evolution of the goaltender stance.

Now, the chickens come home to roost as I take on the original intent of the project.

Understandably, player helmet usage was not an isolated shift either, and I argue it was not even a major shift. Rather, it was reflective of attitudinal shifts and a game that was increasingly faster.

THE EVOLUTION OF "PROTECTIVE" HELMETS

The first player helmets date back to the 1920s -- most famously, the Ace Bailey incident in 1933 prompted Eddie Shore to don a helmet for the remainder of his career, and Bill Masterton's tragic death in 1968 also potentially contributed to a number of adopters. Many of these early helmets were pretty sparse in their protection and were designed to lessen impact but also allow the player's head to "breathe."

From '65 to '85, some of the first helmets were thin, dinky Cooper helmets, used by early adherents like Red Kelly and Ron Ellis. Yet what was consistent seemed to be the inconsistence -- Kelly didn't always wear it, and Ellis wore his briefly early in his career only to go helmet-less for nearly a decade before returning to protection in the mid-1970s. Stan Mikita was off-and-on, as was Mike Bossy, Clark Gillies and Ted Green. Mike Milbury actually stopped wearing his after they were ruled mandatory for new players by NHL President John Ziegler in 1979.

One of the first consistent adherents was Canadian hero and good ol' Ontarian Paul Henderson, who began wearing a Northland model similar to this one, a style that had also been used by Stan Mikita. Henderson fiddled with it a bit, adding a football mask at one point, before settling on the much more popular CCM model (basically, the HT2). The Northland helmet was big and clunky, but it's level of padding was second to none; nevertheless, most players would gravitate towards the more-aesthetic CCM HT2.

By the early 1980s, a Swedish import momentarily wrested popularity from CCM thanks to its explicit use by the Edmonton Oilers. The Jofa 235, affectionately called by some "The Skid Lid," had been immensely popular in Europe (the Soviet National Team frequently wore it, along with the Jofa 280), and it was picked up by young superstars Wayne Gretzky and Jari Kurri. But the 235 was laughable when it came to protection - the whole idea for the Oilers was that helmetless Dave Semenko (a real-life Ogie Oglethorpe) would take care of the heavy stuff.

Gradually, as players clearly realized that the 235 just wasn't going to work, the CCM HT2 came back and was the industry standard, basically up until the alterations of impact foam that we saw in the 2000s. While recent initiatives have been progressive, the reluctance to adopt greater protection offered by the Northland and later the Winnwell/Cooper SK2000 helmets parallels the recent dilemma with helmets in MLB: aesthetics and other elements of player preference can often take a backseat to safety.

Among the games I observed, there was a gradual shift in helmet usage: 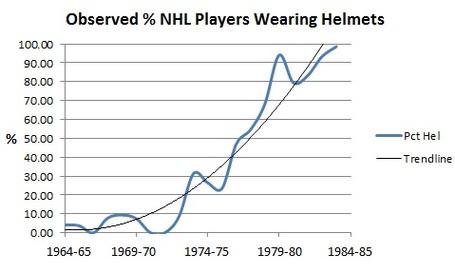 It's pretty impressive to note that, even without Ziegler's initiative, player usage jumped from around five to ten percent at the beginning of the 1970s to roughly 65 percent by the end of the decade.

The trend had all the characteristics of a generational shift. Most of the new helmet-wearers were young players who'd experienced increasing helmet usage in their youth leagues and chose to continue wearing them. On the other hand, there were a number of cases of older players making the switch: Mikita (not the last time he would be involved in player innovation), Rod Seiling, Darryl Sittler, Pierre Pilote, Lee Fogolin, Larry Robinson, Ellis and Bob Gainey were all players who did not initially wear helmets but later opted to do so.

At the time there were tough-guy detractors of the new helmets, but it was surprising to find they also had some pretty heady defenders. For instance, as tough of a persona as current analysts Mike Milbury and Don Cherry like to portray, they have been and still are part of player safety evolution.

For every comment Cherry makes about "soft" Europeans, remember that it was under his tutelage you saw the first Bruins teams with several players wearing helmets, and while there were a number of past Boston adherents (including Dit Clapper and Eddie Shore late in their careers), Milbury was one of the very first Bruins in the 1970s to wear one regularly.

Cherry's support of player safety is sporadic, of course, but Milbury has made some pretty impressive stands in the past, and he was even an advocate for the recent USA Hockey rule change that moved the checking age from Pee Wee (10 to 12) to Bantam (13 to 15). Keep in mind, though, that for whatever reason Milbury decided to go helmetless after the Ziegler decision.

THE IMPACT OF A FASTER GAME

One thing that struck me while viewing the infamous Broad Street Bullies of the 1970s was not their physicality -- they were no more physical than the Boston Bruins of the same period, nor the New York Rangers or Chicago Blackhawks. Instead, their distinguishing feature was speed. I was consistently blown away by the frenetic pace of the Philly game, and the most extraordinary games I have ever seen were those between the Bruins and Flyers in the playoffs during the early to mid-1970s. Television cameras actually had to move further away from the ice to capture the game as the speed of it increased during this time period.

Players were also aware of the harrowing cost of that speed -- the hits were intensified and more injurious to both hitter and hittee, and soon the Flyers were one of the first teams to ice up to one-third of their players in helmets.

In the 1960s, a direct hit at full speed was incredibly rare. It usually meant that a player was upset at another player, or that the hitter was perturbed by some other event. It was cause for a fight. Thus, the '60s game seemed to have a deliberate care to focus on the puck, and players would slow up in anticipation of impact with one another.
Increasingly with the faster teams of the 1970s, you saw big hits as course-of-the-game events and, rather than adding to the overall number of hits, you saw them take the place of the more-careful hitting of the previous era.

The decision to wear helmets was not just an attitudinal shift; it was a response to the evolving game evinced above. If the impetus was concern about sticks and pucks in the face, you probably would have seen the co-development of the use of masks and helmets. Instead, the focus was on the brain.

To that point: the game in 1960s, 1970s and 1980s was remarkably consistent in regards to dirty stick play. While deliberate sticks to the face today are considered abhorrent, it was common practice for two annoyed players to get the sticks up and battle at eye level in the 1960s. In one game in 1965, I watched as Eric Nesterenko chopped John Ferguson over the top of the head, only to see Ferguson pop Nesterenko in the face so hard he spurted a six-inch diameter pool of blood in a manner of seconds.

I also saw the sticks go up in a number of confrontations during the 1970 NHL All-Star Game, no less, and Glenn Anderson sticked someone in the face in a 1983 game for a two-minute penalty. Paul Coffey even bopped a guy in the nose with his stick in 1984.

We might argue that we today have the stick hazard quelled, and that headshots are the real rising issue. In that case, I watched helmet-less Tim Horton target the head on a rough check in 1967, and a high check from behind on Bobby Rousseau that same year. I saw helmet-less Toronto tough guy Jim Harrison throw a high elbow on Bruce MacGregor in 1971. None of those were called.

This hit by Gary Dornhoefer in 1978 was just a two minute penalty, as the Bruins player's head thudded off the glass: 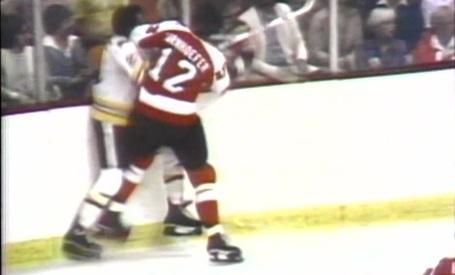 There wasn't any discontinuity in the direction of the checks: Some players hit high, some hit low, and when tensions ran hot it was more likely the former than the latter. What this really seems to suggest is not that headshots and concussions are a rising problem in today's NHL, but that we are getting better and more careful in diagnosing and reporting them. The entire league could still use some lessons on effective hitting.

The decision to go from no helmet to helmet was the largest and most important step in the evolution of NHL player safety. Those first players had to demonstrate to others that the helmet wouldn't compromise play, that it would allow the head to breathe, and that it did indeed protect the head effectively. It was one of the first true evolutions in player safety, nearly concurrent with the use of masks for goaltenders, and it opened the door for other minor innovations to improve its effectiveness.

It also changed player characterization; hair was a not insignificant part of recognizing your favorite player in the early eras, and moving to a more-standardized look placed character evaluation firmly in the hands of style of play (and the occasional mustache/beard). A deeper study could look into the number of concussions/injuries before and after helmet use, though I'd suspect that reliable data is hard to come by.

Yet the rise in the use of player helmets was not done on its own; it was part of a larger confluence with the increasing speed of the game. Game speed and helmet usage worked together to help form the game we see today, and for that reason as a tandem they merit inclusion into the discussion of major shifts that have altered our game.