It's safe to say that Philadelphia Flyers head coach wasn't happy during the second period of Tuesday night's game against the Detroit Red Wings.

An unsportsmanlike conduct penalty was called after Flyers pest Zac Rinaldo gave a member of the Wings a bit of a love tap behind the play, and Laviolette voiced his displeasure in a way that doesn't require words.

Via @brianbrown25, the image picked up by Comcast SportsNet Philadelphia: 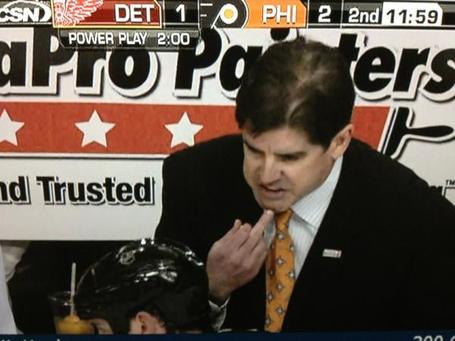 This all came following a huge hit from Red Wings defenseman Niklas Kronwall on Flyers forward Jakub Voracek. The Flyers clearly thought the hit was high and to Voracek's head, while the officials contended that it was a clean check. That didn't make Philadelphia all that happy, and after Kronwall denied a challenge by Brayden Schenn, Rinaldo decided to take matters into his own hands by stirring the pot after a later whistle.

UPDATE: Kyle Scott of Philly sports blog Crossing Broad chimes in with some analysis of the video.Maybe it wasn't a middle finger after all.

@TravisSBN watching back the video, it was pretty clear he had gum in index finger and was pointing at his chin, not intent, I thought.

You be the judge.