Brandon Bollig's Parents (?) Are Awesome And The Top 5 Hockey Fights Of The Week

It was a busy week of hockey fights around the NHL, but the parents of one Chicago Blackhawks fighter stole the show over all of them.

Share All sharing options for: Brandon Bollig's Parents (?) Are Awesome And The Top 5 Hockey Fights Of The Week

There were a lot of hockey fights this week. For real.

According to our friends at hockeyfights.com, there have been 454 fights across 997 NHL games this season. That's a ratio of .46 fights per game. This week, that number was up to .56 -- 24 fights in 45 total games. So that's perfect fodder to resurrect our weekly look at the best hockey fights of the week, Friday Hockey Fights.

Let's get right to the week's top five.

The Lightning didn't necessarily acquire Aulie at the trade deadline for his fighting ability, but he certainly showed it off here in this one against Greening. The Senator picked up a Gordie Howe hat trick in his team's 7-3 thumping of the Bolts, but there's no doubt who won this fight.

Greening came in with the hit on Aulie in the corner -- you can see Aulie's neck snap against the glass, but I'm not sure I'd call it a dirty hit at all -- and it clearly wasn't received all that fondly. Aulie steps up and challenges Greening for the hit and the two go at it. It sucks that they didn't pop the visors off before the fight, but despite it, both guys don't seem hesitant to throw punches.

This one gets a spot in the top five just due to the sheer domination Aulie exhibits with that right hand, including the absolutely devastating last punch.

These two players don't like each other all that much. Back in the 2006 Stanley Cup Playoffs, when games were on OLN and the Ducks were still Mighty, the two dueled during Game 6 of their Western Conference Quarterfinals series. Iginla fights more than the average skill guy, but it's not like he drops the gloves all the time, and Beauchemin might fight once a season.

So it's more than just your average hockey fight. There's all kinds of history between these two, and the bad blood boiled over last Friday. There's no doubt that Iginla wins this one pretty handily, but Beauchemin hangs in impressively. Always fun to see guys who don't drop 'em all that much getting involved.

Heavyweight battle lives up to heavyweight battle hype. No doubt about it. The timing -- immediately following a goal -- adds a whole other level to the importance of this fight, and these guys really didn't disappoint. The give-and-take is just phenomenal, and it's really difficult to determine which player won this battle.

This one could easily have been the top fight of the week, but you'll have to read on to see why it wasn't.

Set the scene: it's Randy Carlyle's first game as coach of the struggling Toronto Maple Leafs. They're in Montreal taking on their arch rival, the Canadiens, and the home team just days earlier picked up Brad Staubitz off waivers. The Habs took an early 1-0 lead, and that was Mike Brown's cue to step up and make something happen.

Something happened all right. Words don't do this fight justice.

The scene-setting from the broadcast team here -- he's from St. Louis! -- really gets you ready to watch Ryan Reaves and Brandon Bollig pummel each other. In terms of the quality of the fight, it's fair to say that the Brown vs. Staubitz fight and perhaps even the Rosehill vs. Thornton fight are better.

But in terms of entertainment value, it's hard to argue against this one. Bollig wins the fight in close, but it wasn't a blow out by any stretch of the imagination. The best part might be the smiles shining through the punches toward the end of the bout. Or maybe it's the respectful taps on the helmet as the guys are separated.

No, who are we kidding? It's definitely Bollig's parents cheering on from the stands. 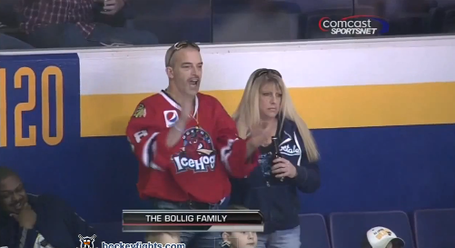 Update: We've been told by numerous folks that this is not Bollig's mother, despite what the CSN broadcast led us to believe. Still, there's some relation here, and his dad is still cool enough for this to be the top hockey fight of the week.