Seemed like a matter of time before the St. Louis Blues and San Jose Sharks just dropped gloves and all-out brawled. The Blues were up big -- 2-0 heading into the third and 3-0 heading into the waning moments -- and it just felt like a fight was coming. And it certainly came, with battles breaking out all over the ice.

The rumble featured everyone on the ice, as well as one double-leg takedown and two refs falling over while trying to break things up. Also of note: A lot of people got hit in the face.

The fight starts in the corner and is pretty tame, especially compared to what happens next. There's pushing, shoving and grabbing, but the refs seem to have it all under control. And then a double-leg takedown coupled with a ground and pound happens.

That kind of set things off, and the shoving match in the corner turned into a full-on rumble. Punches were being thrown about wildly and at one point two refs try to break things up and end up on the ice, too.

This screencap is a favorite of mine. Check out the faces and the punch being thrown. 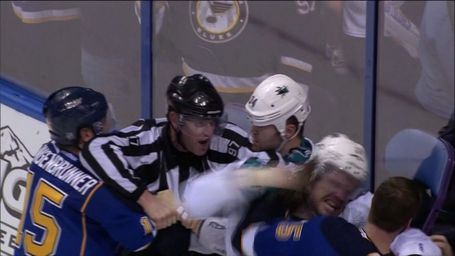 The refs were pretty much powerless to stop any of this.

And when they did get involved ... well, hilarity ensued.

Tune into Game 3. Should be a blast!