Daniel Sedin being back with his brother Henrik for the Vancouver Canucks wasn't necessarily supposed to give the Canucks an extra bit of toughness heading into their elimination Game 4 against the Los Angeles Kings. It has, though, and maybe by inspiring a brother to bash.

Henrik Sedin, whether intentionally or accidentally, threw a backhand at Dustin Brown while chasing the puck into the corner.

That seemed to lead Brown's nose getting bloodied, but the NHL distributed a note to media disavowing that, instead saying that Brown was hit by a puck. 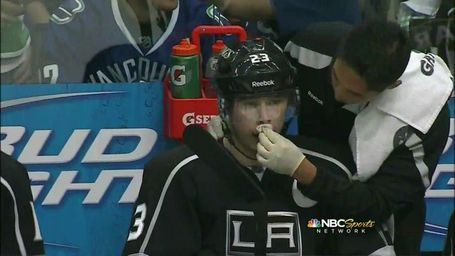 One thing it didn't lead to? A penalty for Sedin.

For more on the Canucks, head over to Vancouver Canucks blog Nucks Misconduct. For more on the Kings, head on over to LA Kings blog Jewels From The Crown and SB Nation LA.