Nothing quite like a goalie punking out a player trying to start something. Braden Holtby wasn't having whatever Rich Peverley was serving up and let him know about it in front of the net. Peverley was trying to block Holtby, Holtby gave him a little shove and Peverley dropped to the ground with the quickness.

And then Holtby struck a pose, arms folded across his chest. The sequence -- especially the glare from Peverley that followed -- was absolutely amazing.

The second angle is amazing, as well. 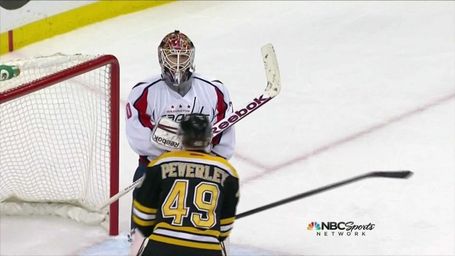 And that's the GIF of the game so far. Holtby just doesn't even care that Peverely acts like he's going to slash him. Just gives absolutely zero cares.