Danny Briere is credited for his offensive explosion in the postseason, but his defense leaves much to be desired. That was the case in Game 2 against the Devils.

It seemed like the Philadelphia Flyers might just pull out Game 2. Ilya Bryzgalov played out of his mind in the second period of Game 2, summoning a standing ovation from the often-hostile Wells Fargo Center faithful after turning aside a nearly 18 minute long New Jersey Devils onslaught.

But as the third period began, Bryzgalov's teammates failed to step up in front of him. It was only a matter of time before the relentless Devils forecheck paid off, and that's exactly what it did just 3:08 into the final period.

In a four-on-four situation, defenseman Adam Larsson jumped into open ice, picked up a little drop pass from Dainius Zubrus and waltzed in on goal. Adam Henrique provided the screen, and Larsson's shot easily beat Bryzgalov over the glove-hand shoulder.

How did Larsson get all that open space?

Let's begin as the Devils have control of the puck along the far wall, to Ilya Bryzgalov's right. It's thrown on net, where it hits Bryzgalov and bounces into some open ice in front of the goal. Flyers defenseman Kimmo Timonen is tied up with Zubrus in front of the goaltender, and while Matt Carle tries to get to the loose puck, he quickly realizes he can't leave Henrique all alone, as Zubrus has peeled off and will certainly get to that puck before Carle does. 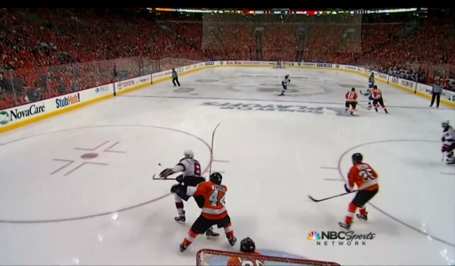 Larsson has dropped way back to the outside of the zone, but notice how both Philadelphia forward, Danny Briere and James van Riemsdyk, have completely given up on defense. They're cheating towards the neutral zone long before the Flyers were able to assure control of the puck in the defensive zone, and they left big gaps in their wake. As soon as the Devils defensemen realize Zubrus has control of this puck, they're able to jump back in the play without restraint.

In fact, Briere doesn't seem to notice that the Devils have regained control of the puck -- how would he with his back turned to the play? -- until he sees Larsson jump by him and back across the blue line. 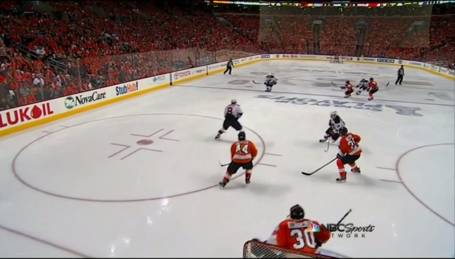 Uh-oh. That looks like a 3-on-2 developing. By this point, Briere had no chance of catching Larsson. Zubrus skates the puck out away from the Philadelphia defense and waits for Larsson to catch up, and by that point, Henrique has pushed his way to the front of the net with the defenseman Carle, while Timonen has followed Zubrus up towards the top of the right circle. 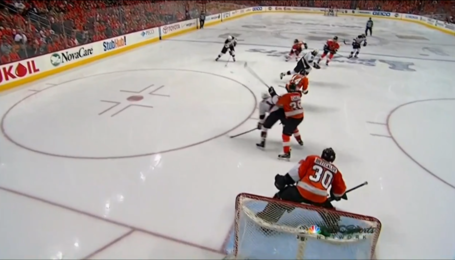 Zubrus dishes the puck off to Larsson. Briere's chasing, but it's pretty clear at this point that he won't be catching him, and Timonen was drawn just far enough away by Zubrus to eliminate any chance of No. 44 marking Larsson.

It gives Larsson complete control to jump deep into the Philly end and rip a shot from in close over the shoulder of Bryzgalov. 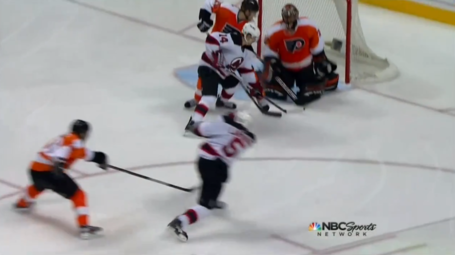 Briere is often credited as a "clutch" player because he steps up his game so strongly in the postseason. There's no denying that he is a tremendous offensive talent, but he's also perhaps the worst defensive forward on the Flyers, if not of the eight teams remaining in the postseason.

His goals against per 60 minutes of ice time in this 2012 postseason sits at a whopping 6.03 goals following Game 2's action, second on the team to often-linemate Brayden Schenn. The closest non-Flyer on the list, of players still playing in the postseason, is Nashville's Paul Gaustad, who's goals against per 60 minutes of ice time sits at 4. Gaustad plays some of Nashville's toughest defensive minutes, while Briere's line is mostly sheltered with offensive zone faceoffs against relatively easy opposition.

Briere is not a good defensive player. The numbers show, the video shows it, an the scoreboard on Monday night in Philadelphia showed it.