Sloganalysis: What A Slogan Can Say About Your NHL Team

Some NHL team slogans, like 'Be The Thunder,' are pretty great. Others inexplicably speak in first-person, insist you're part of their army, or simple beg you to 'experience.' But can a team's slogan reflect its success on the ice?

Share All sharing options for: Sloganalysis: What A Slogan Can Say About Your NHL Team

Previously in Sloganalysis, we investigated whether there tends to be a correlation between a team's slogan and that team's success on the field of play. Along the way, we have needlessly ridiculed people who were probably trying their very best to come up with slogans.

This time around, I took a look at 34 slogans of NHL teams that fit into seven recognizable categories in terms of tone and message. Here are the results. (Keep in mind that instead of simple winning percentage, I assessed NHL teams by their PTS%; in other words, the percentage of possible points they were able to achieve. In this respect, most teams will register over .500. Below .500 is pretty bad.) 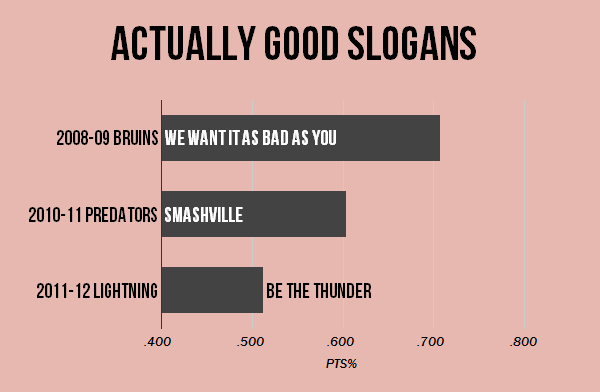 These Sloganalysis pieces I've done have been excessively snarky -- far more snarky than I would typically prefer to be. I don't actually have an inherent disdain for ad people. It's just that ... well, if you're tasked with coming up with a slogan, there are so many possibilities. Even within six or seven words, there's plenty of room to get creative, and/or say something cool. Throughout this study we have so rarely seen that, but the least I can do is recognize the cool slogans when they do come around.

This slogan isn't gonna change the world or anything, but it perfectly and concisely sells us on a team that won't necessarily be all that good. At least, says the slogan, you're going to see plenty of us skatin' around and hittin 'shit.

They're the Lightning, you see, and they want you to make a ruckus. I love it as much as I could love a slogan, which is a moderate amount. This might be my favorite slogan I've seen in any sport. 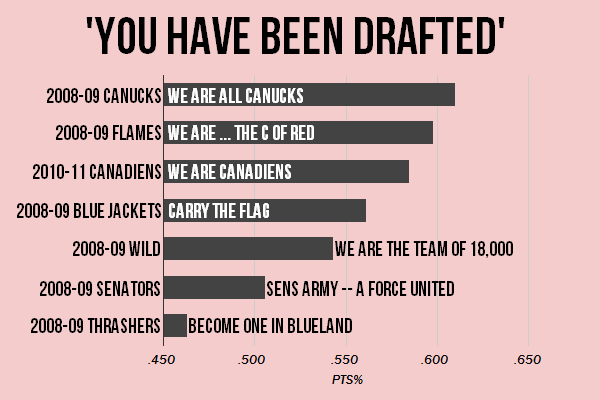 Ah man, there's a hockey fan draft? I don't want to be drafted! I think I might go hide up in Canada for a litt-- aw shit.

"We have been shot. Pick up the thing that got us shot."

Become one in Blueland.

Blueland! It takes some serious ambition to try and claim Atlanta as hockey team territory. Here is an incomplete list of things the city of Atlanta identifies with more strongly than the Thrashers:

Wow. Two teams went the "experience" route in the same year, huh? Note the PTS% of these two teams. They were pretty terrible.

I've never been to an Avalanche game, but The Colorado Avalanche Hockey Experience sounds an awful lot like a package deal they sell at concession stands. It's $20, and it consists of two hot dog deluxe meals, two large Cokes, and tokens for an arcade game in which you throw hockey pucks through a basketball goal. 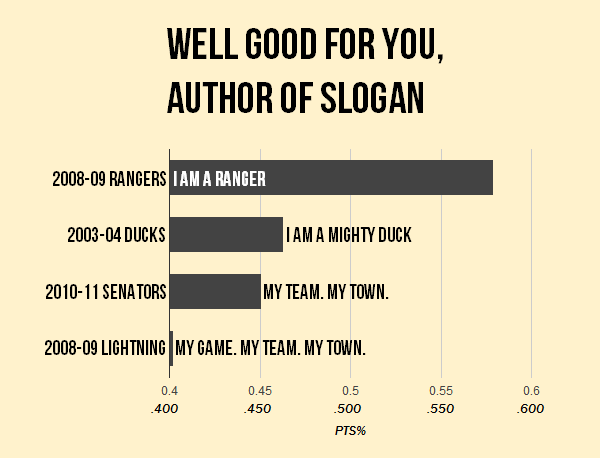 Coming up with slogans is back-breaking work, so sometimes teams like to throw their slogan authors a bone by allowing them to occasionally write team slogans about themselves. Ideally, this slogan would look something like, "Hey, I'm Greg, and I'm the guy who writes slogans for the Boston Bruins. Just wanted to pop in and say hello. Okeydoke then, I'll be back next year with a real slogan. Later gator! Go Bruins!"

Unfortunately, the slogan authors sometimes tend to completely misunderstand this gesture. "No, dude. No. We hired you to write a slogan. That doesn't mean you're the owner or the mayor of the city or whatever ... what? No, you're not a duck either! Do you know how this works?" 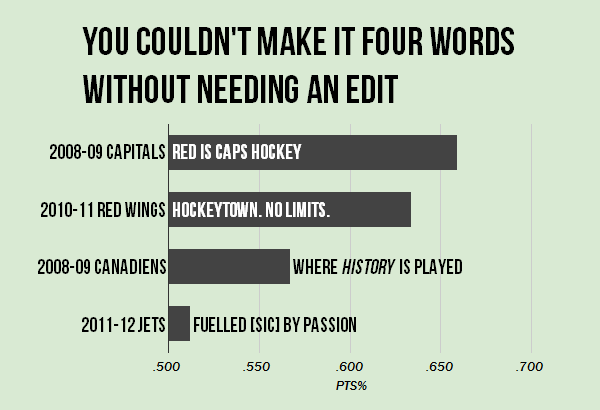 Listen, y'all. I'm not the sharpest knife in the drawer or anything, but from my experience as an editor I'm fairly confident in my ability to recognize what's gonna fly and what ain't.

Were these words supposed to be in this order? Did some of the words fall off the refrigerator? I know these word magnets are a real hoot, but I'd advise you to use a pen and paper, or email, or something. That way you wouldn't have to drag your fridge into my office to show me. By the way, I have no idea why you refrigerate your canned goods. It's gotta be heavy as hell.

The only way those two things make sense together is if you're talking about city limits. And listen, you can't just annex the entire universe and call the whole thing Detroit. I can't sell that to anybody.

Where HISTORY is played.

You placed the emphasis on the wrong word. The word play is on the word, "made." Unless you were playing on the aphorism, "Where BLISTORY is played," which does not exist.

This is what we call editorial ambivalence. "Fuelled." If you told me the extra "l" was a Canada thing, I would believe you. On the other hand, "fuelled" just looks so profoundly odd that I'm itching to call out an entire nation on its spelling ... whatever. Maybe spelling doesn't matter. Maybe that guy on the message board in 2001 who made "your/you're" mistakes and typed "for all intensive purposes" was right: spelling and grammar don't matter as long as people know what you're trying to say.

But if that's true ... God, as an editor, I guess I'm filling a useless position. Ugh. I'm gonna go take a nap. Write "Ffuelllled byy pasionnnn" and throw it on a billboard if you want. I don't care. 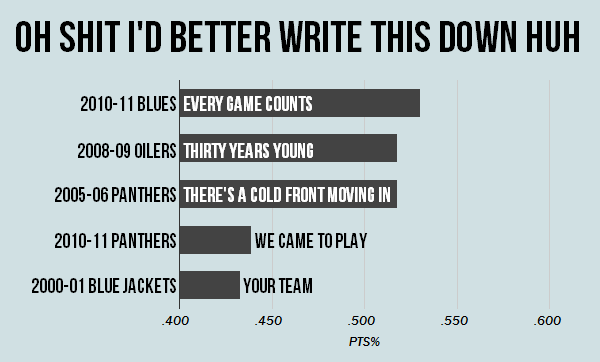 There's a cold front moving in.

Seriously. Screw the five percent of this country that fantasizes about it being cold outside.

We came to play.

Ah shit man ... I mean, I brought a sixer over, got Speed 2 on DVD, was kinda hoping we could just chill out. But you got your hockey shit and everything, yeah, that's cool if you just want to do that. 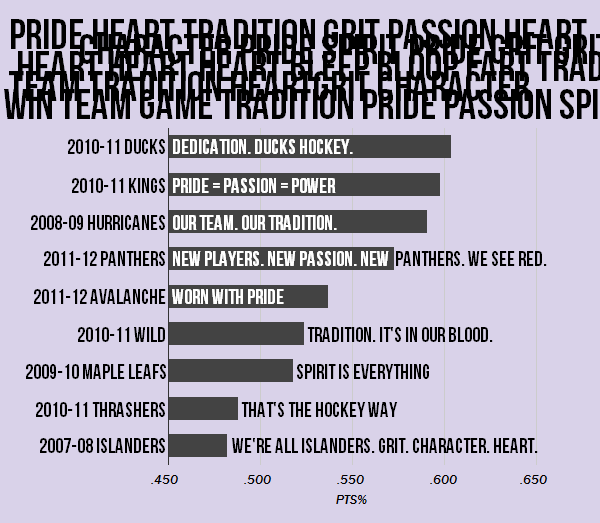 Nine teams fit into this category. Nine! Unlike their baseball counterparts, the NHL teams that emphasized heart/hustle/pride/what have you in their slogans weren't horrible across the board.

The conclusion here? Well, honestly, it's difficult to draw any. There seem to be demonstrable correlations between MLB and NBA teams' slogans and their winning percentage, but NHL teams are sort of all across the map.