With the No. 1 pick in our SB Nation 2012 NHL Mock Draft, our Edmonton Oilers delegation at The Copper & Blue have selected Nail Yakupov, a right wing from the Sarnia Sting of the Ontario Hockey League. 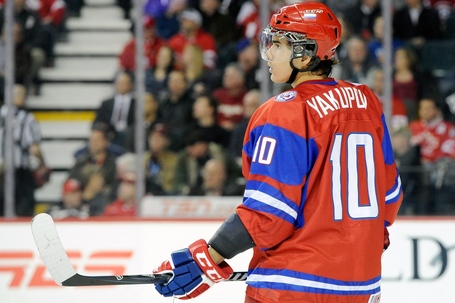 Yakupov is the No. 1-ranked skater according to NHL Central Scouting and he's the consensus No. 1 overall pick in the 2012 NHL Draft. For more on why the Oilers selected Yakupov, check in with The Copper & Blue.

For more on his credentials, check with a variety of player profiles from around our network at Defending Big D, The Cannon and Hockey Wilderness.

Next on the clock: Our Columbus Blue Jackets bloggers at The Cannon have their selection for the No. 2 overall pick.