With the second pick in SB Nation's 2012 NHL Mock Draft, our Columbus Blue Jackets delegation at The Cannon selects Filip Forsberg, a forward from Leksands IF in Sweden's Allsvenskan. 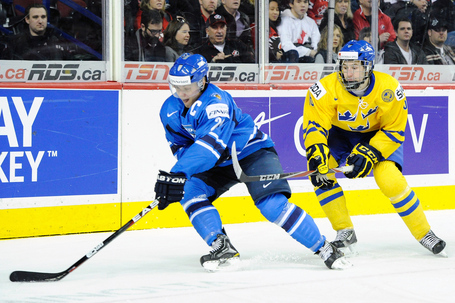 The combination of skating speed and puck control in tight spots are among Forsberg's strengths. When you realize that he's performing so well at age 17 is really where you start to take notice of his game. Also not to be overlooked is his effective play on the backcheck. Thoughts of Ryan Callahan come to mind when Forsberg freely blocks shots and is persistent in a forechecking role, trying to induce opponents to cough up the biscuit.

Next on the clock: The Montreal Canadiens. Making their pick will be our bloggers from Habs Eyes On The Prize.