With the seventh pick in SB Nation's 2012 NHL Mock Draft, our Minnesota Wild delegation at Hockey Wilderness selects Jacob Trouba, a defenseman from the US National Team Development Program in the United States Hockey League. 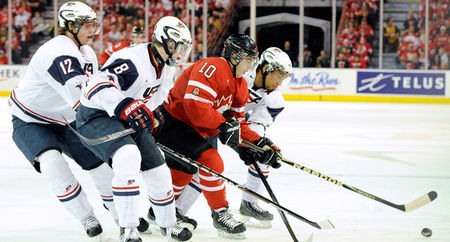 For our Wild bloggers, the pick was simple. Trouba was the best available player and he fills a very specific need as a great defensive prospect.

[We have] him as the second best defensemen in the draft behind Ryan Murray, so the Wild getting Trouba at seven could be seen by some as a bit of a steal. Of course, with the level of talent on the blue line in this year's draft, it almost feels like it is tough to go wrong.

In a May profile of Trouba, Hockey Wilderness wrote that he has "all the tools to become an elite defenseman" in the NHL. Defensive prospects take longer to develop than forward prospects (generally speaking), but there's no reason Trouba shouldn't grow into a fine NHL player.

Follow along with our 2012 NHL Mock Draft in this StoryStream. Stick with SBNation.comand our network of hockey blogs for full coverage of the 2012 NHL draft.