With the 18th pick in SB Nation's 2012 NHL Mock Draft, our Chicago Blackhawks delegation at Second City Hockey selects Matt Finn, a defenseman from the Guelph Storm of the Ontario Hockey League. 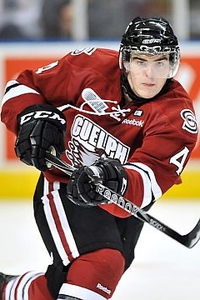 Columbus Blue Jackets blog The Cannon profiled Finn back in May:

After a confidence filled sophomore season with the Guelph Storm, Matt Finn looks to be a lock as a first round draft pick next month.

Finn's motivation for his breakout season came from something that didn't happen. Looking forward to the Ivan Hlinka tourney, Finn was told "thanks, but no thanks". With one of the marquee events that every junior wants to have on his resume, Finn re-dedicated himself to all facets of his game.

Follow along with our 2012 NHL Mock Draft in this StoryStream. Stick with SBNation.com and our network of hockey blogs for full coverage of the 2012 NHL draft.