With the 19th pick in SB Nation's 2012 NHL Mock Draft, our Tampa Bay Lightning delegation at Raw Charge selects Derrick Pouliot, a defenseman from the Portland Winter Hawks of the Western Hockey League. 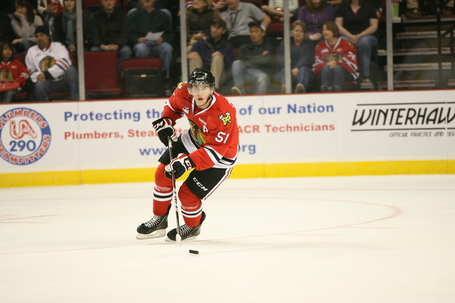 Raw Charge explains their philosophy behind picking a defenseman, not a forward, at this stage of the draft:

There was debate over this pick. There was the want/need of a goalie prospect at the time we made the selection - Andrei Vasilievski or Malcolm Subban were ripe for the taking on the draft board. Yet, as of this writing - they aren't so much a need with the additions this week of Riku Helenius and Anders Lindback to the Tampa Bay Lightning system. Are the Lightning done developing goalies? Absolutely not, even if there is faith in Dustin Tokarski and Jaroslav Janus to become NHL netminders, there will be a goaltender selected in this draft. Just not in the 1st round.

With young forwards like Cory Conacher, Tyler Johnson, J.T. Brown, Brett Connolly, Alex Killorn, Vadislav Namestnikov and others peppered throughout the system, our assessment is that this high pick shouldn't be spent on another forward. That's why we passed up Brendan Gaunce, Scott Laughton, Stefan Matteau and other forwards on the board.

Follow along with our 2012 NHL Mock Draft in this StoryStream. Stick with SBNation.com and our network of hockey blogs for full coverage of the 2012 NHL draft.