It's not the news hockey fans wanted to hear, but at least it's something the NHL and NHLPA agree on. According to Renaud Lavoie of RDS, the two warring factions agreed upon a special waiver period that begins now and ends the day the CBA expires (i.e. Saturday). How convenient. 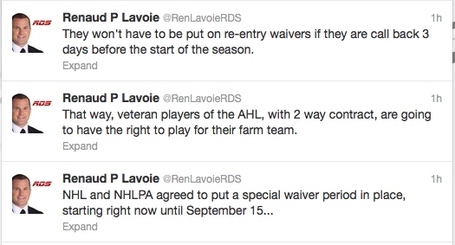 To put it simply, a player currently signed to a two-way contract can play hockey with their farm team, as long as he assigned there by September 15th. In December October, the parent club has up to three days before the season starts to bring that player back without having to put him on re-entry waivers.

Why this is good: Young talent and newly signed journeymen will be able to learn the system, get to know teammates, and get back in hockey-shape before camp with the NHL club. They will get game experience. It may not be equivalent to the NHL, but there are more vets that will be there, upping the level of competition. Being able to bring players up, especially the top prospects, without having to put them through re-entry waivers carries no risk of the player being picked off by another team. It's nice to see the players and owners agree on something.

Why this is bad: The usual stuff like injuries, more players not ready for the speed of the NHL when they're brought back, yadda, yadda, yadda.

The big, flashing sign in a move like is that it's the first substantial step towards a lockout. They are taking care of the players that need their paychecks to live their lives. These are not your Zach Parise's or Sidney Crosby's. AHL salaries are pretty low compared to the player's NHL salary and these guys depend on that money. Also, saying players can be recalled up to 'three days before the season starts' already says the NHL isn't starting when it's supposed to. Vague dates are not a good thing.

It could be a tough fall for NHL fans; there's always the AHL.

For more news and analysis on the CBA negotiations and anything else hockey related, visit the puck heads at the NHL hub. They could use a hug right now.