John Mitchell takes puck to the face, is tougher than you are

Colorado Avalanche center John Mitchell took a puck to the forehead on Thursday night, then returned to the game to score a goal.

Share All sharing options for: John Mitchell takes puck to the face, is tougher than you are

Colorado Avalanche defenseman John Mitchell is in the early running for "toughest hockey player of the season" after taking a puck to the forehead early in Thursday night's game against Columbus, leaving him resembling something out of a horror movie. 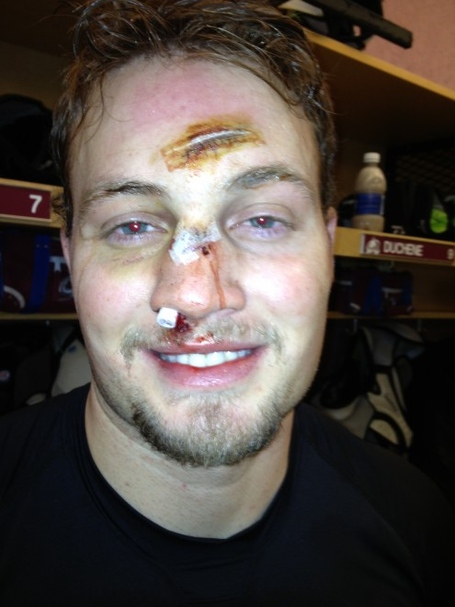 Or, as ESPN's John Buccigross so eloquently put it, that Mitchell "had to fight a hyena in the Avs' dressing room."

Mitchell briefly left the game after taking the puck to the head to receive stitches, but returned to the ice when it was determined he had not suffered a concussion or any broken bones. Mitchell finished with 11:59 of ice time in the game and scored early in the third period to make the score 3-0, with the Avs eventually beating the Blue Jackets 4-0 at the Pepsi Center.

According to Mike Chambers of the Denver Post, Mitchell appeared to have been hit on a shot from the point from Columbus defenseman Adrian Aucoin and occurred roughly in the same spot Matt Duchene took a puck to the face during Tuesday's game.

"I could see out of both eyes. I knew I was cut, obviously, but I could see," Mitchell said. "It's always nice when you have a significant injury, you get stitched up and you come back. I just wanted to come back and try and help the team out any way I could. Scoring a goal is obviously a bonus."

Mitchell signed a two-year contract with the Avalanche in 2012 after playing in 63 games for the New York Rangers in 2011-2012.