Do not mess with the Dallas Stars.

First rule of Dallas sports: Do not mess with the local hockey team. The Dallas Cowboys tried to do just that on Monday, tweeting a joke about how nobody cares that the NHL is returning from its lengthy work stoppage.

The Cowboys deleted the tweet, but come on, yalls know that don't mean a damned thing. 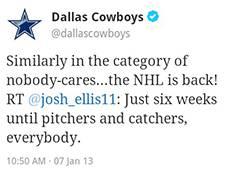 Somebody at Stars headquarters must've gotten wind of the whole thing when arriving at work on Tuesday morning, and holy hell, guess who just became a Stars fan?

At least our #9 got the job done..... RT:" @dallascowboys Similarly in the category of nobody-cares…the NHL is back!" twitter.com/DallasStars/st…

UPDATE: The two teams kissed and made up, which doesn't make this any less awesome.