How to project future performance based on one standout season

When a player has a standout season, it can be hard to determine whether or not we should expect the same results in future seasons. Placing those performances in the context of the rest of the league can drastically help our projections.

Share All sharing options for: How to project future performance based on one standout season

Nail Yakupov shot 21.0 percent last year. Should we expect him to keep it up? There are a few different ways to answer that question, but I think only one of them gives the right answer.

A single season doesn't tell us everything we need to know about a player. Players have hot streaks and cold streaks, good years and bad ones. Everyone who's used the phrase "career year" understands this on some level. So the question is about how you estimate the player's actual talent level when all you have to go on is that small snapshot of his results.

Vic Ferrari once wrote a really nice piece about how to approach this problem. In it, he described Thinker A, who considers the player in isolation from the rest of the league.

In Vic's example, Thinker A sees a player have a 15.5-percent shooting season and asks, "What are the odds of a guy who has the skill of a 10-percent shooter posting a 15.5-percent number for a year?" He asks the same about 11 percent, 12 percent, and so on, until he's produced the red curve below as an estimate of the player's likely talent level. That curve, you'll notice, is centered at 15.5 percent and extends all the way up to the extraordinary possibility that the player's true talent is a shooting percentage of over 30: 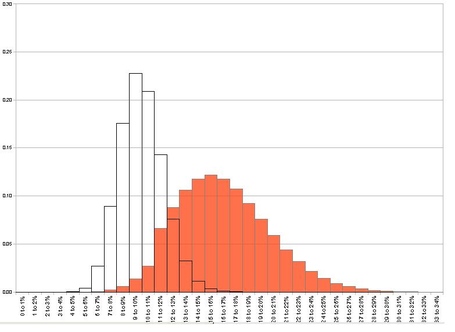 But this doesn't seem right. Although several hundred players have shot 15.5 percent or better in their rookie year, not very many of them went on to shoot 25 percent or above for their career.

Thinker A's analysis says that it should be slightly better than even odds that a hot rookie proves to be an even better shooter than what he shows in his rookie year. Yet if we make a list of everyone who played at least 50 games in their first year and sort by save percentage, we have to go all the way down to 36th before we find one whose final career shooting percentage is higher than where he started.

It would seem obvious that there is a flaw in this approach, right?

I once mentioned Vic's article to Triumph44 (of Driving Play), and he said he always thought Thinker A was a fallacy, that nobody was simultaneously knowledgeable enough to produce that plot and shortsighted enough to believe it. Yet within the last two weeks I have encountered two different people making exactly Thinker A's argument.

One of those conversations occurred in the comments on my last piece. The other revolved around the question of how many games we need to see from a player before we can conclude that they will have a below-average Corsi.

Each of these cases -- the shooter, the goaltender, and, uh, the Corsi-er -- are cut from the same cloth. We are looking at a small sample size and trying to infer an underlying talent level, to forecast a long-term future. And in each case, it is critical to understand the talent distribution across the league.

Without that information, we have no particular reason to think that a player with a 15.5 shooting percentage, a 93-percent save ability, or a 60-percent Corsi had unusually good luck. The arithmetic would conclude that it's almost equally likely that they'll improve further as that they'll slide back to the pack.

But when we know the underlying distribution of talent, we know that we're dealing with performances at the extreme tail of the performance curve. And that changes things dramatically; now the choices aren't as simple as lucky or unlucky; they're:

Once we think about it that way, it no longer seems reasonable to say those two choices are equally likely, does it? That's why incorporating the known talent distribution is important.

I have to believe that everyone knows this if they stop to think about it. If I'm wrong, please let me know -- I'll happily take any even-money bets from people who saw Nail Yakupov's rookie season and concluded he'll probably finish his career with a shooting percentage at or above 21 percent.

The correct way to solve each of these problems is the same: The likelihood that Nail Yakupov is really a 21-percent shooting talent isn't just given by the probability that a 21-percent talent would shoot 21 percent in a given year; it's actually determined by the product of that number and the fraction of NHL players who are 21-percent shooters.

Once you incorporate that second term, the arithmetic takes care of itself, providing the proper bias toward reasonable talent levels. Without it, the equations are bound to give some answers that don't even pass the basic sniff test.

• How to forecast NHL goaltending performance

• Here's why the Rangers should (and shouldn't) be worried