Is Corsi really as predictive as we think?

Let's look at the link between shot differential and shooting percentage.

Share All sharing options for: Is Corsi really as predictive as we think?

But Phil Birnbaum had an interesting post Tuesday challenging that idea, proposing that shooting a lot might be correlated with taking lower-quality shots.

He pointed to some pretty well-established score effects, or changes teams make depending on the score of a game, wherein teams adopt a defensive shell with a lead, taking fewer shots but for a higher percentage. He additionally noted that on some plays a player might pass on a low-percentage shot for the chance at a higher-percentage one, and wondered if there weren't strategies and/or random fluctuations that could result in both a low shot total and a high shooting percentage.

All of which is mostly conjecture that's been made before. The key piece of supporting evidence he provides is this:

In other words, he's saying that over the last six years, teams with a bad shot differential also had a modest tendency to have a good shooting percentage.

If true, that would mean that teams with bad shot differentials do a little bit better than you'd expect. It wouldn't change our observation that shot differential is a strong predictor of future results, but it would make it a little easier to believe that system might play a role worth considering.

But there's a catch. Phil's study didn't account for the score, and as he noted, the score influences shooting percentages.

In that case, there would be no causal link between the poor shot differential and high shooting percentage, so we need to account for the score if we want to make claims about players choosing to pass rather than shoot.

The easiest way to do that is to focus on situations where the score is tied. If there really is an underlying link between shot totals and shooting percentages, we should see it in the score-tied data. So let's take a look: 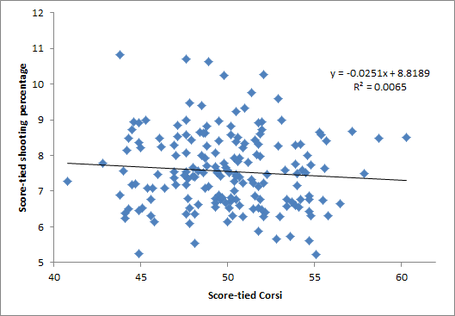 The link here is much weaker than what Phil saw -- weak enough that there's better than a one-in-four chance of seeing a link that strong just by random chance in a data set this size. That's bad news for proponents of system effects.

So if there isn't much correlation during the score-tied minutes, where do we see it?

The correlation is negative in each case, but in trailing and tied situations it is so small that we might as well call it zero -- it explains less than 1 percent of the differences between teams, and could easily just be random chance (for example, we see a stronger correlation between the number of letters in a player's last name and his height).

When teams trail or are tied, they all play essentially the same way. What difference exists is almost entirely in how teams play with a lead; it appears that some play more conservatively than others, which I find very interesting.

People have often wondered about the value of playing a defensive shell (here's a recent example) but the question is difficult to answer since the trailing team's strategy changes too. The observation here gives us the ability to compare the performance of teams that play most or least defensively with a lead -- since both cases will involve an opponent playing the same desperate style, this will give us a direct window into the value of the defensive shell.

Phil's point that it's possible for a team to deliberately adopt a low-shot high-percentage strategy in all situations is obviously true. But the only place where there is any real evidence for teams doing that is when they are protecting a lead, and even there the differences aren't terribly large.

So if we're going to make a case for a team doing better than shot differential would suggest, we should focus specifically on their performance with a lead, and expect that impact to be minor.

Of course, it's possible that they've hit on a radical new strategy for tied and trailing situations. But since we've never seen that before, with each subsequent team that has a high shooting percentage in those situations, the safer bet is that they've simply run hot and will slide back to the pack.

Eventually, a team will surprise us, but we'll probably win a lot of bets between now and when that happens.

• How to forecast NHL goaltending performance

• Here's why the Rangers should (and shouldn't) be worried