It's time for the NHLPA to take control of its players

After Max Lapierre's dirty hit sent the Sharks' best defenseman to the hospital, San Jose coach Todd McLellan called out the NHLPA, to an extent. He might be on to something.

Share All sharing options for: It's time for the NHLPA to take control of its players

The following is not a defense of Maxim Lapierre. He should have the proverbial book (and perhaps a real one) thrown at him for what he did to Dan Boyle.

The following is not a defense of Patrick Kaleta. He crossed a line (again) and deserved what he got.

I'm not even sure it's a defense of anyone, outside of maybe Brendan Shanahan.

NHL fans love to rip the dean of discipline. They loved ripping Colin Campbell and they love ripping Shanahan. He's inconsistent. He focuses on the wrong things. (Name of NHL player you don't like) should have been suspended for that!

I'm not even sure all of that is inaccurate. I find the NHL disciplinary system to be incredibly inconsistent. I still don't understand how Steve Downie was allowed to keep playing after he concussed Nashville defenseman Roman Josi. Even more comical is the fact that Colorado ended up with a power play in that case because Nashville players dared come to the defense of a teammate after such an obviously illegal hit.

Here's the video from Tuesday night, when Lapierre took out Boyle and sent San Jose's best defenseman to the hospital.

Lapierre rode Boyle's head into the boards from behind. There isn't a defense for this hit.

As I was reading through reactions to it, quotes from San Jose coach Todd McLellan that I read in Puck Daddy's piece caught my eye.

"It's the player's game. We just went through a lockout to try and fix things. The players had huge input into how they want the game to be played. The respect factor is not where it needs to be. Hard and stupid are two different things."

This strikes me as a bit of a shot toward the players. No, I'm not suggesting that McLellan is blaming the NHLPA for what happened to Boyle. Instead, I'm here to suggest that McLellan believes the NHLPA has the power to do more about this type of on-ice conduct and isn't doing nearly enough.

"Please get Maxim Lapierre off my hockey team" 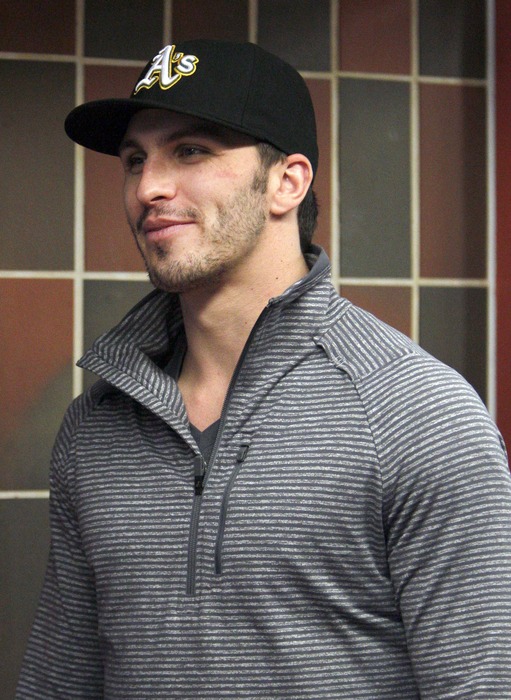 Blues fans at St. Louis Game Time are sick to their stomach over Lapierre's presence on their team.

One thing is undeniable: Whether it's Lapierre, Kaleta, Downie, or a host of other players, it's clear that the respect factor that everyone likes to talk about in the playoffs isn't universal. No player who respects his opponent and the game would do what Lapierre did Tuesday in St. Louis.

Players like to cite hockey's  "code," but as we've learned countless times over the years, the "code" only pertains to your opponents.

That's why the Blues fought in defense of -- you guessed it -- Lapierre on Tuesday. That's why, in the same article linked above, you can read quotes from St. Louis captain David Backes saying Lapierre "goes to war for us and is an integral part of our team," while San Jose's Logan Couture says Lapierre is a "pretty gutless" player who "turtles."

After vehemently -- and unsuccessfully -- coming to the defense of Raffi Torres last year during a playoff series against Los Angeles, I wonder what Sharks GM Doug Wilson thinks of Lapierre's hit.

If the "code" mattered, then-Boston Bruins defenseman Andrew Ference wouldn't have been ripped left and right for these comments after teammate Daniel Paille laid out an opponent with an illegal check.

"I thought a lot about that," Ference told reporters on Thursday, saying he wanted to be a good teammate but not a phony.

"I mean, it’s a bad hit, right?" Ference said on NESN, the television network owned by the Bruins and the Red Sox. "That’s what they’re trying to get rid of, and you can’t be a hypocrite and complain about it when it happens to you, and say it’s fine when your teammate does it."

A guy willing to be honest when asked by reporters about a teammate's illegal hit is a bad teammate because he didn't go with the standard "He isn't trying to hurt anyone. He plays hard. He's a great teammate" psychobabble that everyone else goes with. This is a bad teammate.

That's why nothing is changing. Max Lapierre gets insulated by a new team as if he's been there for years. As soon as he becomes a Shark, Raffi Torres has been treated unfairly and is really a great dude.

Ultimately, Lapierre is responsible for his own actions. He took out Dan Boyle. The system didn't do that. But until we see some sort of meaningful reform, and players -- teammates or not -- are allowed to hold each other responsible for their actions, you can bet that we won't see significant change.

Like McLellan said, it's the players' game. The respect will return to the game when they're ready for it to.