Ever wonder what the possession numbers looked like for the greatest dynasties in NHL history?

Share All sharing options for: Possession numbers through NHL history

I wanted to draw some attention to an outstanding project Ben Wendorf quietly published in a back corner of the internet.

One of the most widespread tools for team analysis is shot attempt differential (Corsi) when the score is close. Looking specifically at those close situations (within a goal in the first two periods or tied in the third period) removes most of the impact of how teams tailor their strategy to the score, and gives a strong measure of which teams are best at controlling play and outshooting their opponents.

Unfortunately, like most of our recent inventions, we don't really have data for this going back more than a few years. That's okay, but it'd be more fun to talk about where the Kings rank historically if "historically" didn't mean "since 2007-08."

Ben came up with a way around that. He started with the Hockey Summary Project, which has archived boxscores from all of eternity. Those box scores list how many shots on goal each team had in each period, and Ben made a leap: since score effects show up most strongly in the third period, maybe just the shot differential from the first two periods would be a reasonable surrogate for score-close Corsi.

And so he set about looking into it. He looked at how shot differential in the first two periods correlated to winning in the mid-50's, and at how score effects looked back then. He showed that his measure correlated strongly with zone time.

And then, having established that his metric behaves reasonably similarly to the more widely-used Corsi numbers, he started looking at era effects. For example, Ben looked at how parity has changed over time (at least with respect to puck possession), calculating the league-wide spread in two-period shot percentage in each year:

Or you can make timelines through history for individual teams: 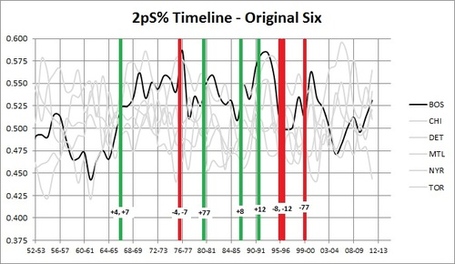 Or, to come back to that question of where the Kings fall historically, we can look at the distribution of outcomes over the last 60 years (the Kings' score-close Corsi last year was 58.0%) 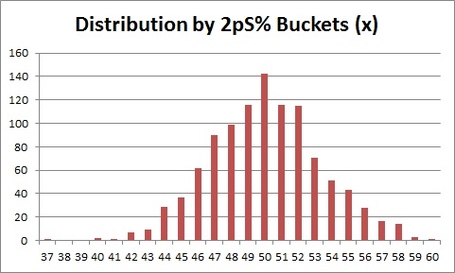 Where do we go from here?

In the current era, the differences between teams in shooting talent turns out to be fairly modest. And if we don't expect one team to have a much higher shooting percentage than another, then it becomes important to see who gets the most shots. As a result, we've observed that shot differential is a strong predictor of future results, which drives a lot of the current analytical thinking.

But this wasn't always true. Hawerchuk previously posted that the '81-88 Oilers had the best shooting percentage differential in the modern era, and Ben's data additionally informs us that their two-period shot differential hovered right around 50% (ranging from 51.0% in '81-82 to 49.0% in '85-86). So I'd be interested to see Ben's work be used to study how the relative importance of shot volume and shot quality have evolved over time.

This is neat work by Ben, and a really interesting start towards expanding the historical context for our analysis. I hope to see it get more attention than it has so far.

• James van Riemsdyk out with back spasms

• Claude Giroux can't handle the weight of the world