Ryan Miller stops 44 shots, gets stuck with another loss

Imagine how bad the Sabres are going to be when Ryan Miller isn't around to keep the game close.

Share All sharing options for: Ryan Miller stops 44 shots, gets stuck with another loss

At some point this season the Buffalo Sabres are going to trade starting goaltender and free agent-to-be Ryan Miller.

When that happens we're really going to find out just how bad this team can be.

The Sabres lost again on Thursday night, 2-0, to the New York Rangers and closed out what has to be one of the single worst months of hockey in the history of the franchise.  As has been the case for much of the season in Buffalo, the game really wasn't as close as the final score.

Had it not been for Miller turning aside 44 shots it probably could have -- and perhaps should have -- been a hell of a lot worse.

(The Rangers are blue, the Sabres are red) 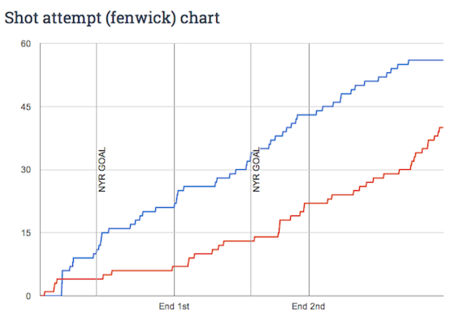 The Sabres have played nearly 20 percent of their season and have managed to win just one game in regulation. In their past 20 regular season games dating back to last season they have won just two games in regulation (they've won three additional games in shootouts). That's bad. Very bad. And keep in mind, this is all happening with Ryan Miller on the team. At some point this season, as this complete teardown and rebuilding of the organization continues, he will not be there. Even though Miller hasn't duplicated the success he had in 2009-10 when he was the best goalie in the league and backstopped team USA to a silver medal at the Olympics, he has still be a steady, reliable goaltender that's always been at or above the league average.

He's actually having a pretty decent season this year. And the Sabres aren't even close to winning with him.

There is very little to suggest there is any sort of a turnaround coming, either.

Dating back to the 2007-08 season the worst FenClose team (that's percentage of unblocked shot attempts when the score of the game is within one goal -- it's simply a measure of puck possession when the game is close) was the 2007-08 Atlanta Thrashers, finishing that season at 41.2 percent.

After Thursday's loss the Sabres currently sit at 37.9 percent this season.

They haven't just been bad so far this season, they've been historically bad.

• Does goalie fatigue impact a shootout?

• The NHL’s illusion of consistency