Nothing new for the Devils. They'll go back to their roots when they pull on green-accented sweaters for their outdoor game at Yankee Stadium.

Share All sharing options for: Stadium Series 2014 jerseys: Devils will bring back green for outdoor game

Jerseys have been unveiled for the Winter Classic between the Red Wings and Maple Leafs, but what about those other five outdoor NHL games that will be played in 2014?

The answers are slowly coming. The New Jersey Devils announced that they'll be wearing their original road uniforms when they take on the Rangers at Yankee Stadium on Jan. 26.

For those who've beem asking, Lou Lamoriello said Devils will be wearing original red jerseys with green in outdoor game at Yankee Stadium.

New Jersey wore green-accented uniforms for the first 10 years of their existence, from 1982-92, after which they ditched the green and replaced it with black. That's the look they still sport today, although in recent years they've worn the green jerseys on St. Patrick's Day. 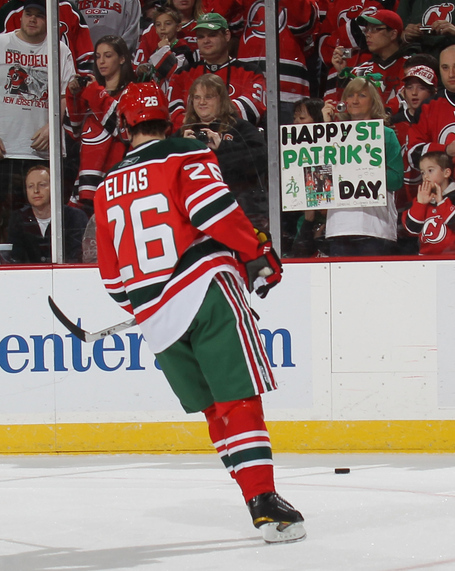 Special "chrome" logos were unveiled for the seven teams participating in the four Stadium Series games, but there was no indication on whether or not the jerseys would be similarly themed. With the Devils announcement, it doesn't appear as though that's the case -- thankfully. Chrome accented jerseys would be .... well, really awful.

The Senators are expected to unveil their Heritage Classic jerseys on Nov. 28. The game is expected to be a throwback to the 1915 Stanley Cup battle between the Vancouver Millionaires and the Senators, which means we could see the Canucks wear the vintage maroon Millionaires jerseys that they wore for a game last year. The Sens, then, would probably wear a white heritage-style jersey. We'll find out soon enough.