On Thursday, we talked about Henrik Lundqvist's new contract. I argued in pretty general terms that when a top-end player reaches eligibility for unrestricted free agency (UFA) and signs a big-money, long-term deal, he'll generally be underpaid over the first part and overpaid over the last part.

Can that be right? Lundqvist is underpaid at an $8.5 million cap hit?

Let's walk through the details of how I evaluate a long-term contract.

How much is Lundqvist worth right now?

We could look at what other goalies are paid to guess what the market rate is. But that's not really the question here -- if everyone else wildly overpays for a certain type of player, that doesn't mean you should too. The key question is how much Lundqvist really should be paid.

Here's the process for working that out:

How good is Lundqvist right now? Even that isn't a trivial question to answer: when the difference between an average goalie and a good one is only a couple saves per thousand shots, random fluctuations play a big role and nailing down a player's talent level isn't easy.

A few weeks ago, I highlighted some fine work by Brian Macdonald on how to come up with a good estimate of the goalie's actual talent. I'll use that approach here; if you're curious to know more about how it works, I encourage you to read that article. And I'll focus on estimating even strength save percentage, since it's generally a better predictor than total save percentage.

For his career, Lundqvist has a .928 even strength save percentage on over 11,000 shots. That's enough shots that we have a pretty good handle on how good he is -- Brian's accounting for the role of random chance would pull our estimate in toward the mean just a bit and guess that his talent level is roughly .927.

But maybe he's changed with age. If we just look at the last few years, he has a .932 even strength save percentage on about 4,500 shots. Since the sample size is smaller, chance plays a bigger role and Brian reels the numbers in a bit more, estimating his current talent at .929.

I'll do something in between, using all of the data but weighting the most recent performance most heavily. That gives me an estimate of .928 for Lundqvist's current talent level.

Step 2: Compare that to replacement level

A useful way to assess value is to look at how much better the player did than what you'd expect from a typical cheap, easily added replacement. To do that, we'll need an estimate of how good a replacement-level goalie is.

So I want to exclude starters and good backups, and just look at the guys who are barely making the NHL for a handful of games. In the last three 82-game seasons, goalies who played fewer than 10 games had an average even strength save percentage of .913.

Let's check if that's a reasonable estimate of how good a replacement-level goalie is. We'll look at who performs at about that level and whether they're roughly what we think of as replacement level.

Looking at that list of players, I'm reasonably comfortable saying that a .913 even strength save percentage is roughly replacement-level goaltending.

So if we're estimating Lundqvist as a .928 even-strength goalie, he stops an extra 1.5 percent of shots relative to a run-of-the-mill cheap replacement. Over 1,750 shots, that saves his team about 26 goals.

Step 3: Convert that to wins

If you look at how goal differential relates to wins, it turns out that every six goals saved is worth roughly one win.

That number surprises some people -- in a league where 3-2 is by far the most common score, it's hard to imagine it'd take six goals to get an extra win. Phil Birnbaum had a nice explanation for why the number is higher than people expect in baseball.

Here's a slightly oversimplified version of how it'd work in the NHL: imagine taking an average team, picking six of its games at random, and giving the team an extra goal in each game.

Three of those games will be games it won anyway, so your extra goal doesn't change the result. In another game or two, the team lost by two or more and your goal still doesn't help. Only occasionally do you turn a loss into a win (or overtime loss), and so in the end, your six extra goals only produce roughly two extra points.

That means Lundqvist's 26 goals saved are worth about four and a half wins relative to a replacement goalie. (I'm rounding up because the goals he's saving are higher value than our random goals, since none of them are empty net goals.)

Step 4: Convert that to a salary estimate

How much should a team pay for a 4.5-win player?

We can phrase that differently: given how much unrestricted free agents normally get paid, how much would it cost the Rangers to buy 4.5 wins if they passed on Lundqvist and instead went after other free agents?

Gabe Desjardins worked through this using a projection system called VUKOTA and came up with a cost of $2.65 million per win for UFAs who signed on the open market in 2010-11, with players who re-signed before free agency making about 15-20 percent less, and restricted free agents making even less than that.

The cap that year was $59.4 million, so this estimate would be that each win purchased via open-market UFA cost teams about 4.5 percent of their cap space. Given Monday's estimate that next year's cap will be somewhere around $71 million, we might conclude that each win will cost about $3.1 million on the open market next summer.

That might sound crazy to readers who are used to cap hits topping out in the $8 million range. But remember, those cap hits are average salaries over the course of a period where a player's skills are declining sharply. We'll get to that shortly, but right now we're just talking about what Lundqvist would be worth currently.

If it's reasonable to give Shea Weber, Ryan Suter and Zach Parise contracts that average more than $7.5 million per year from now until they are 40 years old -- and pay salaries of $12-14 million in the first year of the deal, it should be noted -- a $14 million figure for a one-year deal for an elite player might not be as crazy as it sounds.

How should we expect him to age?

It might be plausible that Lundqvist is worth $14 million right now, but we certainly don't expect that of him for the next seven years. We need to work out an estimate of how goalies age.

I followed the method that Tom Tango laid out for producing aging curves, accounting for variance in each year's numbers before calculating the average change from, for example, age 26 to age 27. Since we're already 1,200 words into this piece, I'll spare you the arithmetic and just show you some plots.

Looking at all of the data since '00-01, we find that the average goalie's even strength save percentage doesn't really drop all that steeply. Here's what a goalie's career would look like if he had the league-average change each year and was a .928 goalie at age 31: 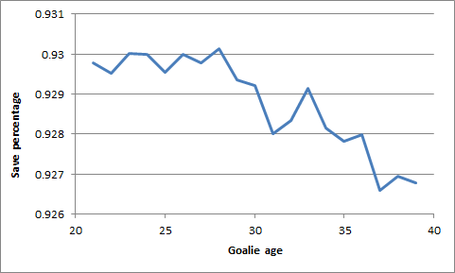 That looks pretty darn optimistic, but there's a catch. In the above plot, we're just looking at the goalie's numbers on their own, and not in comparison to the rest of the league. But over this time period, the league average save percentage has risen pretty sharply -- the .913 that we estimated as replacement level today was the average in the '00-01 season that I used at the start of this study.

So if the game continues to change over the next decade the way it has over the last, we might expect to see Lundqvist lose only one- or two-tenths off of his save percentage, but we'll see the rest of the league catching up to him.

In fact, I'd guess it's more likely that the league will make changes to prevent the continuing rise of save percentages. If that happens, we'll see Lundqvist's numbers fall towards the pack rather than the pack rising towards Lundqvist, but the practical impact is the same.

So instead of looking at the average career arc for save percentage, let's look at an aging curve for distance above replacement level. Here's the typical for a goalie who's 1.5 percent above replacement at age 31: 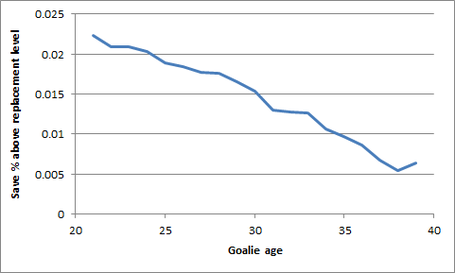 A team would be expected to consider what it knows about the specific player and make adjustments, but this curve would be the starting point, and it's what I'll use here.

Lundqvist is underpaid now and probably for the next couple of years. If the cap goes up five percent per year, this projection would work out to be roughly fair value on average over the life of the deal.

Of course, this projection is just an average. If we added an estimate of the uncertainty to each line of that table, it'd show that the farther in the future we get, the less confident we can be in our projection.

Depending on how fast the cap goes up and how well he ages, Lundqvist may end up being a bargain for the majority of the contract. The Rangers are certainly taking on a sizable risk that by the end of the deal he's a grossly overpaid backup, but they are getting enough excess value from his deal right now to make it a worthwhile risk.

That wouldn't be true of a team in rebuilding mode -- it's a big mistake to sign a player to a contract like this if you aren't in position to take advantage of the years where the player will be a bargain. But for this particular team, the contract seems like a good fit to me.