Jarome Iginla returns to Calgary for first time since trade

Jarome Iginla will face the Calgary Flames for the first time since being traded at last year's trade deadline.

Share All sharing options for: Jarome Iginla returns to Calgary for first time since trade

The Boston Bruins have been involved in some ugly situations over the last few days. Having dealt with the James Neal headshot, Loui Eriksson's concussion and Shawn Thornton's attack on Brooks Orpik, few positive circumstances have involved the Bruins.

That will not be the case on Tuesday night, as forward Jarome Iginla returns to Calgary to face the Flames for the first time since being traded at last year's deadline. Given the truncated schedule developed after the lockout, Eastern Conference teams never played Western Conference teams until the Bruins met the Chicago Blackhawks in the Stanley Cup Final. That meant Iginla's departure from Calgary occurred without the threat of returning to face familiar foes.

Of course, foe is a relative term in this situation as Iginla is viewed in such high regard with those employed by the Flames, via NHL.com:

"It'd be pretty hard to believe he wouldn't get a very warm reception," said Mark Giordano, who inherited Calgary's captaincy from Iginla. "He meant a lot to this organization. He's such a good guy. It goes without saying.

"He's a Hall-of-Fame player. In my opinion probably the most recognizable Flame that this organization looked to for a long time. He was a big part of our team. He was a great guy. Obviously last year it was tough to see him go but [Tuesday] is going to be special."

Iginla's departure from Calgary was long speculated about, as rumors circulated for years about the incentive for the Flames to maximize a return for their aging captain. With Iginla entering the final year of a five-year contract -- and the club destined for the lottery draft -- it became clear that last season was finally the time to move the player. 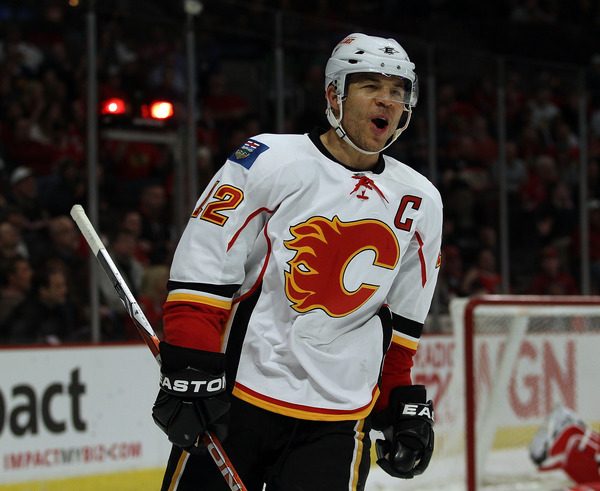 A step-by-step account of how Jarome Iginla left the only NHL team he had ever known and the drama that ensued when he chose Pittsburgh over Boston.

The list of suitors was narrowed to a short collection of teams, with the Blackhawks, Bruins, Los Angeles Kings and Pittsburgh Penguins identified as the frontrunners. Iginla's no-trade clause played a primary factor in negotiations given that he could veto any offer. This ultimately became a factor when Boston and Pittsburgh emerged as the final two options. While his trade came with some turbulence, Iginla finally left Calgary when he was traded to Pittsburgh.

Now, he returns several months later as a member of the Bruins.

While the specifics of the occasion have yet to be unveiled, it's a given that the Flames will honor Iginla in some capacity on Tuesday night. This will certainly be a nice change of pace for the Bruins and a wonderful opportunity for Flames fans to honor one of the franchise's most beloved players.

• Tough times ahead for Toronto?