The randomness of goalies

Goalies are the most maddeningly inconsistent players in the NHL. You just don't know what these guys are going to do from one year to the next.

Share All sharing options for: The randomness of goalies

The toughest job NHL scouts and general managers have is trying to figure out which goalie is going to be good from one year to the next.

It's a task that probably gives them ulcers.

Every year we have a pretty good idea as to which forwards are going to be the top players at their positions and competing for the goal-scoring crown and the Art Ross Trophy. There's a good feel as to which defensemen will be the best and have a shot at winning the Norris Trophy. But goaltenders? You might as well throw a bunch of them into a hat and then start randomly throwing them at the wall and see which one sticks, because nobody seems to have any idea as to who is going to do what.

Just take a look at the top-10 goalies in save percentage this season. It's a list that features Jonas Gustavsson, a complete washout and a liability every time he stepped in the crease in Toronto, occupying the No. 7 spot. Steve Mason, a player that was statistically the worst goalie in the NHL over the past four years and the butt of many jokes when the Flyers acquired him last season while their former goalie, Sergei Bobrovsky, was winning the Vezina Trophy in Columbus, is 10th.

And how is Bobrovsky doing this season? The .909 save percentage he put up before his injury is 29th out of 45 goalies.

Let's look at it another way: Here are the top-10 goalies in save percentage each year going back to the 2009-10 season.

There are a few consistent names (Rask and Lundqvist stand out, and Jimmy Howard surprisingly shows up quite a bit) but it's mostly a bunch of different goalies randomly popping in and out and in all sorts of crazy places. Who is going to remember that year Brian Elliott led the league in save percentage? And then he followed it up with a .907 save percentage the next season.

That sort of thing happens a lot.

Just look at the top-10 goalies from a season ago. For the most part, that looks like a pretty good list. It has two Stanley Cup winners (Niemi and Crawford). Another guy that played in the Stanley Cup Final (Rask) and a couple of big-money guys (Lundqvist, Howard). As a group, those 10 goalies combined for a .927 save percentage last season.

This season that same group has a save percentage of .912. Reimer and Rask are the only two back in the top-10 at the present time. Craig Anderson, last year's save percentage leader, can't seem to stop anything this season.

That sort of drop isn't an uncommon thing.

The table above has 36 different goalies on it. The chart below outlines their year-to-year performance since the start of the 2009-10 season. The names and which line belongs to which goalie isn't as important as the roller coaster of performance most of these guys are from year to year. 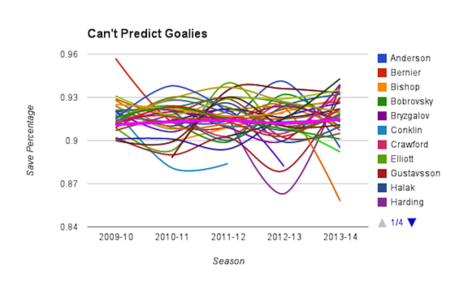 What a mess. Squiggly lines all over the place. You can't make any sense out of it, and neither can NHL general managers.

The big, straight purple line cutting through the middle is the league average save percentage each. The rest are some of the top goalies in the league soaring above it and falling below it from year to year.

There is a short list of maybe four or five goalies that are consistently good every season and then everybody else just seems to be a total crapshoot. Investing long-term contracts in the position, anything more than three or four years, is more than risky, it's kind of crazy.

Take the Los Angeles Kings for example. They are in the first year of their 10-year contract with Jonathan Quick, a deal they agreed to the summer after Quick won the Conn Smythe Trophy during their Stanley Cup run. He was fantastic in the regular season and even better in the playoffs. He never played at that level before that season. Since then he hasn't come close to matching it. This season the Kings have been harder to score against (and not by a small margin) when he isn't in the net because Scrivens and rookie Martin Jones have been unbeatable.

The position is just as unpredictable when it comes to scouting amateur players. Again, scouts do a great job identifying forwards and defensemen and the best ones tend to go early in the draft. Yes, there are guys like Daniel Alfredsson, Pavel Datsyuk, Henrik Zetterberg, Martin St. Louis, and Luc Robitaille that fall through the cracks, but those guys are exceptions, not the rule.

But goalies? Nobody knows anything. And it starts from the very beginning.

Just consider these two charts via Garret Hohl of Arctic Ice Hockey, which nicely illustrates how good teams are when it comes finding the best forwards in the draft and how random the performance of goalies is.

To compare, here's forwards for the same thing: pic.twitter.com/DL97qOl11q

So your team is in the market for a new goalie in the near future? Best of luck to them. They're going to need it.