The Islanders are having a difficult time protecting leads

No team snatches defeat from the jaws of victory like the New York Islanders.

Share All sharing options for: The Islanders are having a difficult time protecting leads

It's bad enough for the New York Islanders that they are currently near the bottom of the Eastern Conference and have lost 19 of their past 22 games.

But it's the way they have lost some of these games that has to be really infuriating.

Their latest defeat, a 3-2 shootout loss at the hands of the Tampa Bay Lightning on Tuesday night, saw them blow a 2-0 third-period lead in the final 3 minutes of regulation. It takes quite a collapse for an NHL team to lose a two-goal lead that late in the game, but if there is one team in the league that's capable of such a loss, it just might be the 2013-14 Islanders with the way they've played this season.

The game-tying goal on Tuesday, which was scored by Lightning forward Valtteri Filppula with 3 seconds to play in regulation, featured the Islanders trying to turn their goal crease into a clown car as they piled everybody on the ice into it.

This is the exact moment when the puck squirted out to Filppula for him to deposit it into the abandoned net. 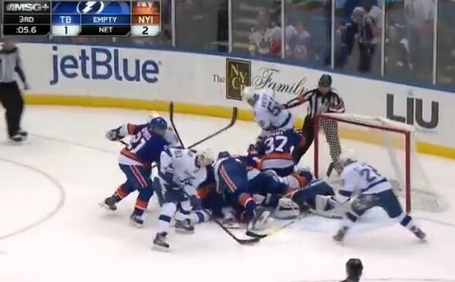 Look at that pile of humanity. That is probably not textbook defense.

They would go on to lose thanks to a slick Nikita Kucherov shootout goal.

Sadly for the Islanders, it's not the first time they've lost a game they were leading after two periods this season, and it's not the first time they've turned a two-goal third-period lead into a loss -- that's actually happened three times times this season. But just how bad are the Islanders in the third period compared to the rest of the league? Consider the following:

That last one is a little unfair at this point since those teams all played full seasons. The Islanders have played two-and-a-half months, so there is still a lot of time for them to turn their record around. Unfortunately, that also means there is plenty of time for them to add to their futility, especially when you consider how bad their goaltending -- 27th in the league in even-strength save percentage -- and defense has been this season.

Not to mention how poorly they've played as a team with the lead. In 286 minutes of 5-on-5 play with the lead this season, New York has been outscored, 17-10 -- the third worst goal percentage in the league -- and attempted just 43 percent of the unblocked shot attempts, ranking 25th in the league.

In the end, these third-period collapses probably won't be the difference between the Islanders making the playoffs and missing the playoffs -- they've struggled enough in other situations to probably miss out no matter what -- but the five or six additional points they've let slip away with these late collapses might have at least kept them in the hunt a little longer.