Shallow Pal: How wrap-around attempts are made easier by NHL's shallower nets

Increased space behind the goal has given players more of a straight line approach to wrap-around shots.

Share All sharing options for: Shallow Pal: How wrap-around attempts are made easier by NHL's shallower nets

NHL nets went on a league-wide diet this offseason, losing four inches of depth, and in turn creating more space to operate below the goal line. While four inches may not seem like much, the nets are visibly shallower, and the space created behind the net does provide extra room to operate for an attacking player.

How is it manifesting itself? Statistically speaking, as Eric Tulsky examined in detail, wrap-around attempts have only marginally increased, but the number of those attempts that have gone in the net is up considerably. But the numbers don't tell the whole story, so let's go to the video and examine things a bit more closely.

Watching how players are scoring on wrap-arounds, one of the biggest differences between this year and last is the angle and route players can now take to execute this shot. With more space behind the goal, players can go post-to-post on a more linear angle, making the wrap-around quicker, and tougher for goalies to react to.

We'll look at four wrap-around goals below. Two originate from above the goal line, while two originate below the line. Why exactly have players had more success in getting these pucks in the net?

Above the goal line

It's something special when a player can hit the blue line, dip his shoulder, hesitate in the circles, and then swoop below and around the goal to maneuver his way to a wrap-around. It takes patience, a solid shot fake, and a goalie willing to bite. In the past, with a deeper net, a player going for a wrap-around beginning above the goal line would have had to take a deeper angle going below the goal to get to the opposite post. But now, with shallower nets, it's a more lateral, quicker cut, making it much more difficult on goalies to react to.

In a 6-2 thumping of the Bruins this season, 24/7 cult hero Tomas Tatar scored a highlight reel goal.

The Bruins actually have the neutral zone spaced out pretty well here, with three players below the puck, and a fourth hustling back into the play. Tatar, with some space in front of him, will attack the blue line pushing the pace. 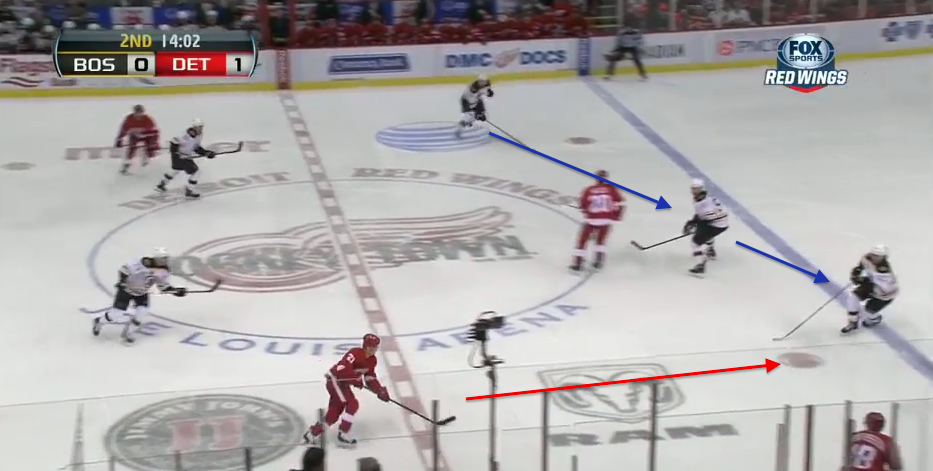 When Tatar hits the dots, the Bruins still aren't in bad shape. Tatar's defender is even with him, and can force him to go below the goal, or at least away from the middle of the ice. The far-side Boston defenseman is equidistant to the goal, and has plenty of time to pinch down to make a play.

Here is where Tatar become dangerous. Dennis Seidenberg, who was on the far-side previously, comes down, but goes to the front of the goal. It's not that poor a defensive play, because in year's past, with the amount of space Tatar had, it would have been very difficult to go post-to-post very quickly. It still is, but instead of having to take an exaggerated turn below the icing line, like he's rounding a base, Tatar can take a more linear angle—a quicker angle—and beat the defender to the spot.

And because of how quick of an angle Tatar is able to take, it leaves Tuukka Rask little time to react and leave the near post, or push off to challenge the wrap-around. Tatar scores a beautiful, effective wrap-around.

This wrap-around goal courtesy Steven Stamkos doesn't start quite as far up ice as Tatar's, but shows some creativity and an interesting wrinkle in how these shallow nets are factoring into goalie decisions.

The Oilers will turn the puck over in their own zone, but aren't in terrible position, as Stamkos has two defenders near him, and Edmonton has pretty good weak-side help.

What Stamkos does next really shows his creativity. The weak-side defenseman loses his man, and the Oiler in Stamkos' path is forced to play it like a 2-on-1. Stamkos fakes the shot (or pass, really just the play to the middle of the ice), and changes the defenseman's angle so he can maneuver below the icing line. 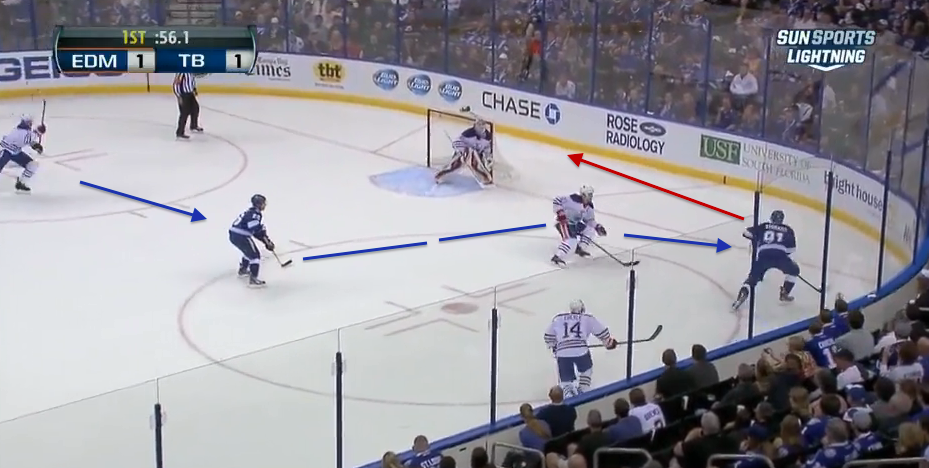 Now even as Edmonton does a pretty decent job recovering, Stamkos is able to take the puck from the bottom of the circle to below the net on virtually a straight line, with more space below that shallow net. Three Oilers are above the icing line, and Stamkos is still going to beat them all to the spot.

Here's where Stamkos' true creativity shines through. Goalies are forced to make a quicker decision here thanks to the shallower net, and Stamkos catches Devan Dubynk drifting. He elects to hold the puck until he's practically out at the bottom of the circle. He executes the move so quickly, all three of those Oilers still can't catch up to him. And now, Stamkos has a clear shot at the far post with Dubynk in recovery mode. 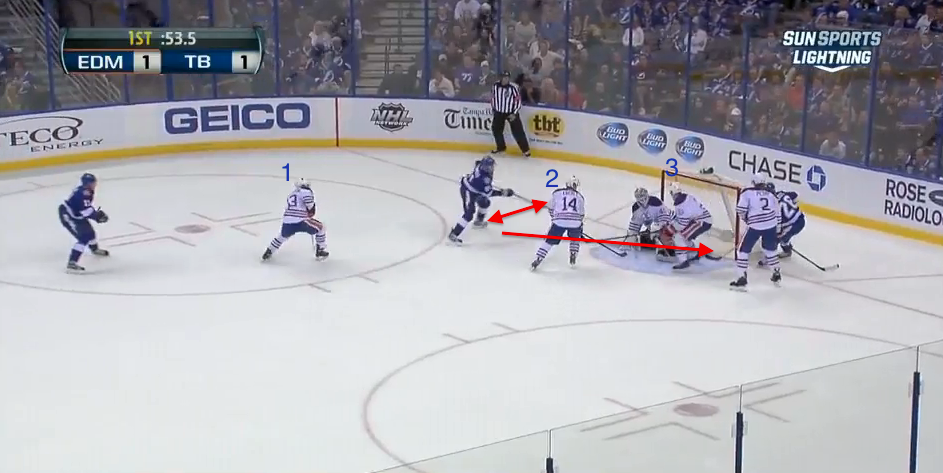 This is a clear example of how the shallower net impacts goalies. The time they have to react to wrap-arounds has been cut down, leading to drifting from post-to-post and overplaying angles. Taking advantage of that, Stamkos holds the puck a second longer and nets himself an easy goal.

Below the icing line

Most players execute wrap-arounds on cycle plays generated behind the goal. Many times it can come via a quick pass and a burst onto the other post in an attempt to catch the goalie leaning. With the shallow net, that burst becomes a lot tougher to react or catch up to for a goalie, because again, the attacking player can move on more of a straight line.

On this goal, the Kings get the puck deep and go to work cycling the puck below the goal.

Dustin Brown, positioned at the far faceoff dot in this first frame, will be the guy who eventually makes a play. But for now, the Kings will just work on getting the puck below the goal line. 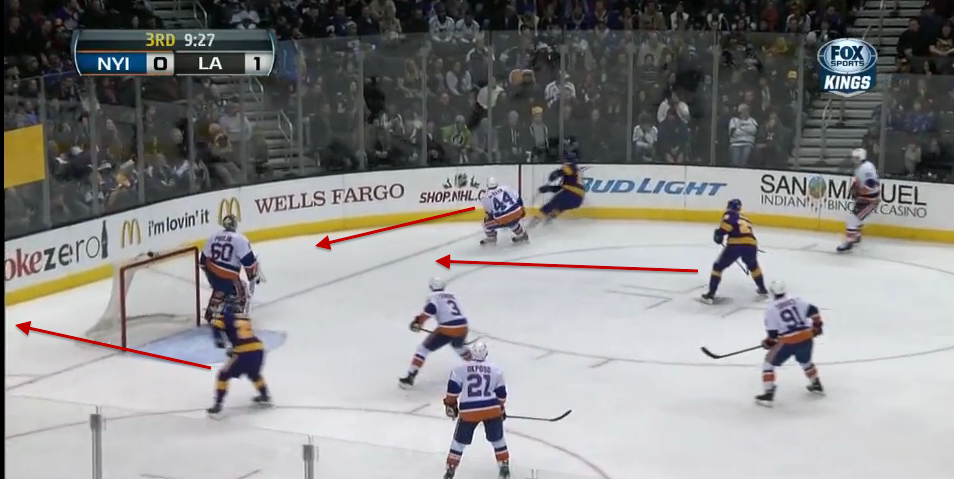 Brown makes his way down to the goal line and takes a blind pass. His defender is not quite on his shoulder, and with more space behind the net, Brown can take the puck and go on a straight line to get to the other post. 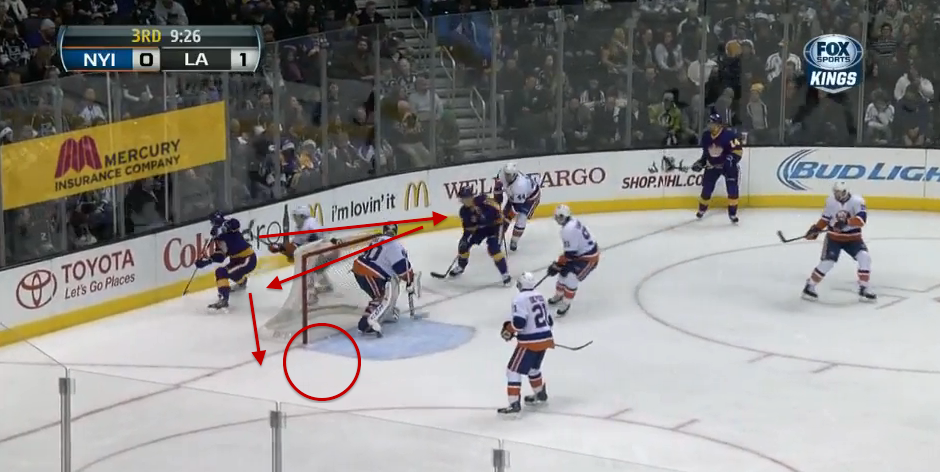 Just a second has elapsed between these two frames. Look at the separation Brown is able to get, and the space he's got ahead of him. 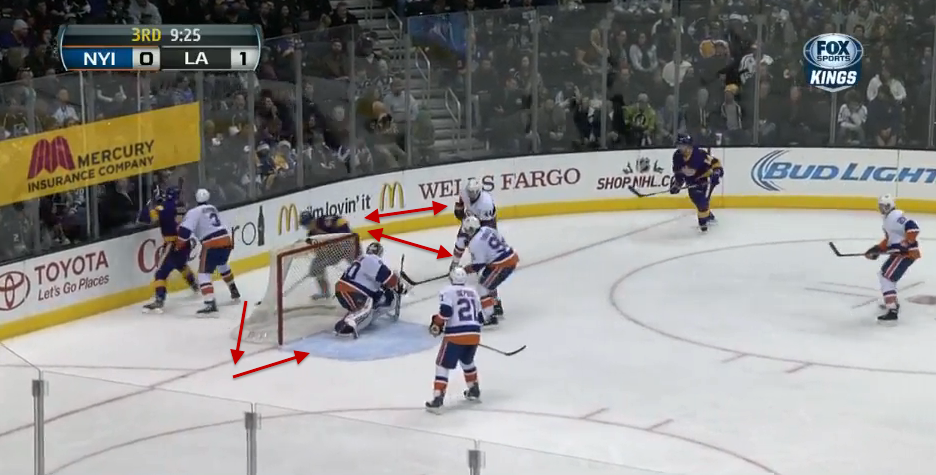 Look at the time between the first frame and this frame. He was on the dot at 9:27, and two seconds later, Brown is all by himself on the doorstep after executing a wrap-around. This all happens so fast, and all happens because Brown is afforded the ability to skate on a straight line with more room to operate behind the goal. 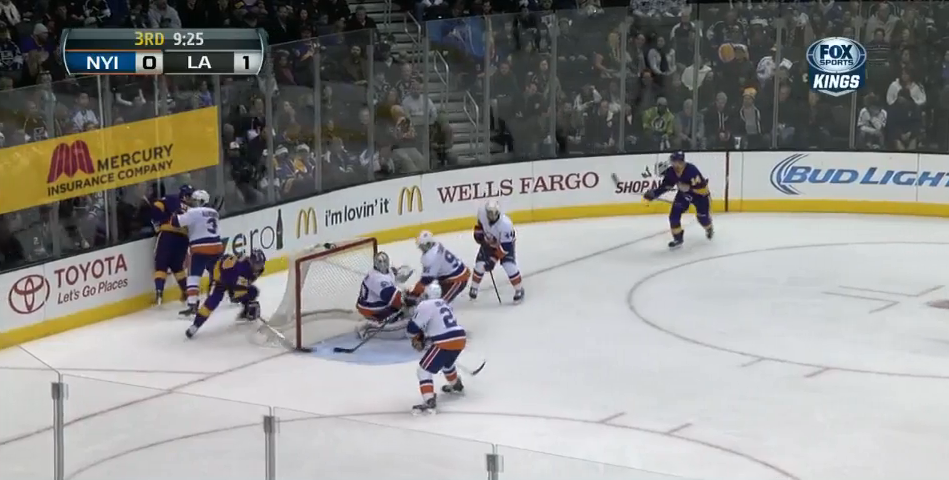 Those quick, tape-to-tape passes in the areas around or behind the goal are now even more lethal, and players have a bit more space to maneuver thanks to these new, shallow nets.

This next goal from Todd Bertuzzi is similar to the Brown play in that he's grounded behind the net, but it comes on the power play. Just like at even strength, the success rate on power play wrap-arounds has also increased from 3.6 percent to a whopping 8.6 percent so far.

Let's go to the video.

The Red Wings begin this power play with a soft dump into the corner. The Flyers PK unit is in very good shape, with four players in a tight square. What Detroit does well is play the puck away from the square, and toward Bertuzzi (not seen in this first frame) by sending it down the boards. 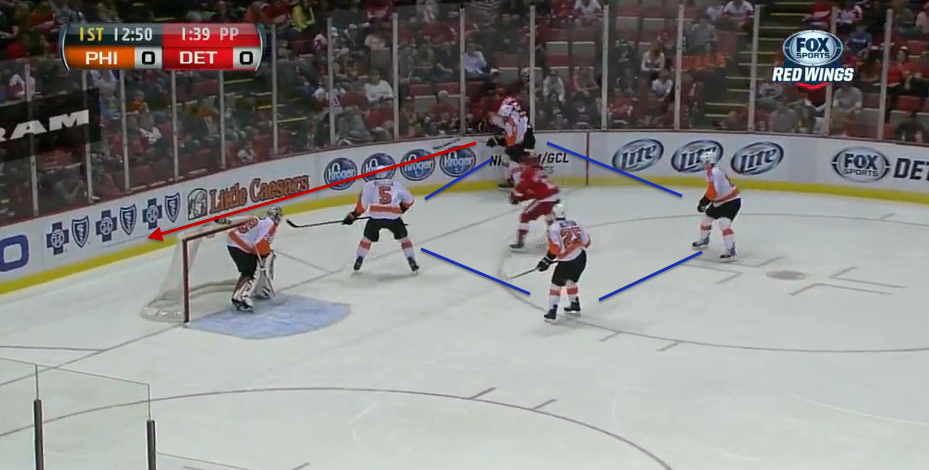 Bertuzzi's next move is so effective is because he was both very decisive and very quick. Even with Ray Emery hugging the post, Bertuzzi is able to maneuver his way out in front (again, pretty much on a straight line). Emery has to at least peak at his other post, but Bertuzzi is already making his move. 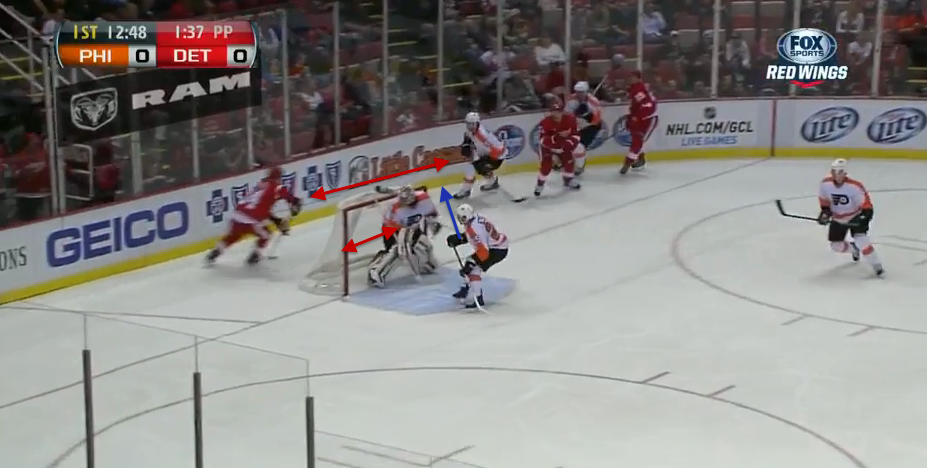 Bertuzzi's move happens so quickly that Emery is completely caught with his eyes on the other post, even though he's in perfect position to make a play. Bertuzzi simply just whips out in front and stuffs the puck home.

Again, it's those quick passes below the goal line that really facilitated the chance, and those passes are made possible in part due to the shallower nets.

Teams are bound to continue to innovate when it comes to taking advantage of the increased space below the icing line, but it's obvious some players are already doing so themselves. It's safe to say the shallower nets are having an impact so far this season.