Are the Minnesota Wild fading again?

The Minnesota Wild had another fast start this season, but just like in years past are starting to slide in the wrong direction.

Share All sharing options for: Are the Minnesota Wild fading again?

Two years ago the Minnesota Wild had the best record in the NHL after 30 games until a second half collapse pushed them to the bottom of the standings by the end of the season.

Last year they raced out of the gate with a 20-10-2 mark after 32 games before stumbling down the stretch (6-9-1), barely holding onto their playoff spot, and quietly going out in the first round of the playoffs at the hands of the eventual Stanley Cup champion Chicago Blackhawks.

It was a similar recipe each year. A fast start thanks in large part to great goaltending that was probably playing a bit over its head and bailing out a struggling offense, and then fading fast when the goaltending returned to a more sustainable level.

Is it happening to them again this season?

Entering their game on Friday against the Winnipeg Jets, Minnesota has won just five of its past 15 games (after starting the season 15-5-4), with only three of those wins coming in regulation. It's been the same problem that's plagued the Wild over the past few years. They don't score enough, which is partly the a result of a far bigger problem: They don't have the puck enough.

Teams that control the puck control the pace of the game. They get the most shots. They create the most chances. They score the most goals. They win the most games. Since the NHL no longer keeps track of possession times the simplest way to measure possession is to go by shot attempts using Corsi (total shot attempts: goals, saves, misses, blocks) and Fenwick (unblocked shot attempts) percentages. Playoff teams are usually near 50 percent or better, while Stanley Cup teams are usually near the top of the league in the 53-57 percent range.

Here is where the Minnesota Wild have finished in each metric since the start of the 2007-08 season, as well as their overall place in the NHL standings.

But there is good news. Their possession numbers this year actually look pretty decent, and might give some hope that perhaps the recent stretch of games has more to do with some bad luck than a team that's starting to go in the wrong direction. That is until you look a little deeper and see that their possession trends seem to indicate a team that's, once again, starting to go in the wrong direction as the season progresses. 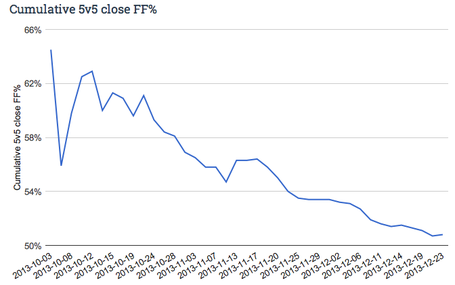 In the end, the Wild are probably right where they should be this season. Not quite as good as their record over their first 20 or so games, but an improving team that has some pieces in place and more help on the way in terms of young talent. In most years they would probably be good enough to earn a bottom spot in the playoffs, but given how strong the Western Conference is this season it might be the wrong year to be a good, but not great team in the West.

• #Buttgoal| Did the officials get the call right?