The Toronto Maple Leafs and captain Dion Phaneuf have been negotiating a contract extension for sometime. By most accounts, the deal would be for seven-years with an annual average value of $7 million with some kind of limited no-movement clause. Essentially, the only thing missing from the equation is an official announcement.

Well, that was the only thing missing, as the Maple Leafs officially (and elaborately) announced that the two sides have come to terms on a seven-year contract on Tuesday morning:

The #Leafs have signed Dion Phaneuf to a seven-year contract extension: #PhaneufSigned pic.twitter.com/4gYEXHpl8u

The timing of the announcement is interesting considering the Maple Leafs participation in the Winter Classic and HBO's 24/7. Nick Kypreos of Sportsnet stated on Monday's Hockey Central at Noon that the announcement was going to come this week to coincide with the season finale of the four-part documentary series at the request of HBO. Whether that is truly the case remains to be seen, but certainly seems like a plausible circumstance. 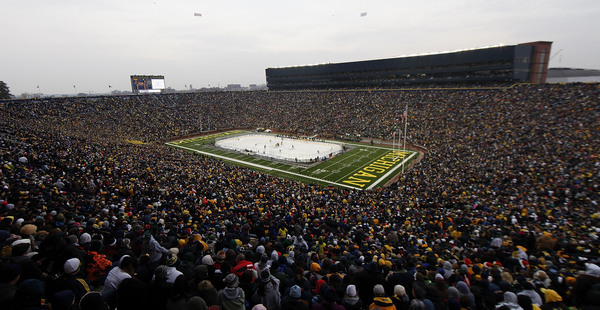 The buildup to the 2014 Winter Classic was a long and winding road. Read up on the twists and turns in anticipation of the first game of 2014.

Regardless, Phaneuf returning to the Maple Leafs was a foregone conclusion. He was by far the best pending-unrestricted free agent on next summer's landscape and would have easily attracted a list of interested teams if he had the option of going to market. Coming off a $6.5 million annual salary, a boost to $7 million is a reasonable increase for the 28-year-old defenseman who also happens to log the most minutes (24:21 per game average) against the toughest competition as the captain on one of the league's most prominent franchises.

While the specifics of the no-movement clause has yet to surface, various reports have indicated that Toronto was looking to include a limited agreement where Phaneuf could isolate a group of teams he would be willing to play for in the event the franchise wanted to pursue a trade.

Defense has largely been isolated as a weakness for the Maple Leafs, so dealing Phaneuf never seemed like a plausible option considering his use as their No. 1. Allowing him to walk via free agency seemed even less likely. Now, the two sides are linked for the next seven-years, which identifies that the club is willing to move into the (near) future with Phaneuf as a significant piece of their puzzle.

• Winter Classic : Will my seats suck? | What to do in Ann Arbor