Can the Maple Leafs shot-quality their way to the playoffs?

Comparing the Maple Leafs to other recent teams' periods of good shooting and goaltending.

Share All sharing options for: Can the Maple Leafs shot-quality their way to the playoffs?

Since early last year, there's been a near-constant discussion about whether the Maple Leafs are genuinely good or just lucky.

Sean McIndoe laid out the debate very nicely at the start of the year; if you somehow haven't yet heard anyone talk about it, you should probably read his piece. If I had to sum it up in one sentence, it would be this: their shot differential is terrible and teams rarely sustain good records without a decent shot differential.

But it turns out that in today's NHL, the differences between teams in shooting percentages are small. Over a month or two, teams can run hot enough to beat their shot differential, but in recent memory those runs have all proven to be transient.

Teams like Boston and Vancouver, sporting some of the best goaltending and forward corps in the league, can do a bit better than their shot differential would predict. But even for them, shot differential drives their results more than shooting percentages do.

On Monday, James Mirtle published an article suggesting that the Leafs' luck seems to be running out. The charts at the end are really neat, showing that since the start of last year, Toronto has had a shot differential that started out bad and has gotten steadily worse, but that this has been mitigated by outstanding shooting and goaltending.

James emailed to ask how much precedent there is in recent history for a 50+ game streak like this. My answer comes in chart form.

This plot is a 50-game moving average for every team's shooting percentage (overall, not just even strength) since the start of the '07-08 season: 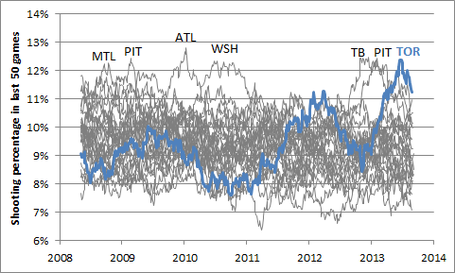 Some things that stand out to me here:

Oh, and let's highlight what each of the previous teams did in the 82 games following the point where they first hit 12 percent shooting: 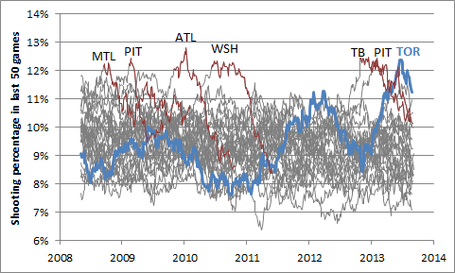 The best any of Toronto's predecessors did over their next 50 games was 10.7 percent.

Toronto may have legitimately above-average shooting talent, but it's awfully hard to believe the Maple Leafs have the talent to sustain 12 percent shooting in the long run if even a team with Sidney Crosby and Evgeni Malkin couldn't do it. And since they've been just a borderline playoff team even with that 12 percent shooting, they don't have much margin for error.

Can goaltending pick up the slack? The Maple Leafs goalies have been pretty good lately, after all. Let's look at another stat called PDO -- it's the sum of a team's shooting and save percentage. PDO is an indicator of how much a team has outperformed (or underperformed) its shot differential. 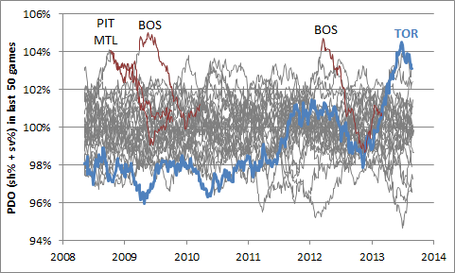 Again, the Leafs' run isn't completely unprecedented. But again, we don't see teams sustaining performance at this level for long.

And the key here is that the Leafs' shot differential has been so bad that they probably need a PDO in the 103.0-104.0 range just to make the playoffs.

The team has suffered injuries, which makes things even harder for Toronto. But if the Bruins -- with record-setting goaltending and one of the deepest forward groups in the game -- can't sustain a 102.0 PDO, it's hard to imagine this Leafs team being over 103.0 for the long run even when healthy.

• Tough times ahead for Toronto?