Logan Couture scored on Thursday night vs. the Oilers, then showed love for the San Francisco 49ers by mimicking Colin Kapernick's celebration.

Rumor has it that there's this place in California called the 'Bay Area.' I don't know. I'm from the East Coast so I don't care about anything west of Appalachia. But in this Bay Area place, there are apparently sports teams. One of them is in the Super Bowl this coming Sunday, and another is playing some damn fine hockey of late.

Civic and regional pride being what it is, the San Jose Sharks took a play out of San Francisco 49ers quarterback Colin Kaepernick's book on Thursday night when Logan Couture mimicked his famed celebration. Watch for it along the glass after the goal.

"@nhl: Yeah he did... @logancouture breaks in, scores, then celebrates by kissing his bicep. bit.ly/VrGxUr"

"Gotta show some love for the Bay Area teams," Couture said on NHL Network later in the evening after the game. 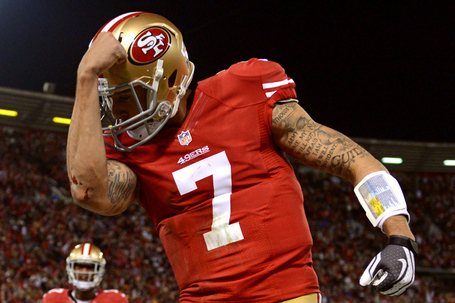